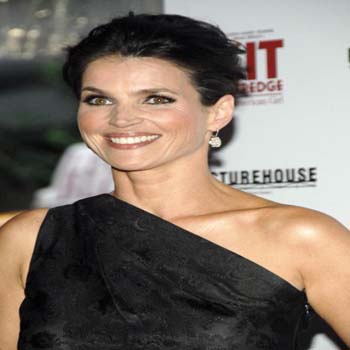 Julia Ormond is the beautiful and classical English actress. She is in the field of acting since 1989. She has rose into popularity acting in the films like Legends of the fall (1994), First Knight (1995), Sabrina (1995) and The Barber of Siberia (1998). She has appeared in many Television and movie roles. She is in the Witches of East End as Joanna Beauchamp on the lead role since 2013 till present. Her new movie Mary is in pre production. Because of her acting skills and talents that have impressed many people, she won the Emmy Award in 2010 for Outstanding Supporting Actress in a Miniseries or a Movie for the role in Temple Grandin. She has appeared in 25 movies so far excluding Mary, the recent one and in 19 television series so far.

Julia Ormond was born in Epsom, Surrey. Her father John Ormond was a software designer and her mother Josephine was a laboratory technician. Her date of Birth is 1965 January 4. She had attended independent schools at Guildford High School and Cranleigh School where she started acting. Most of her classmates were male leading her to have tomboy personality. She used to play field hockey and other sports rather playing with dolls which normally a girl plays with. She had a hard time in her childhood as her parents got divorced when she was young. She is the second child of her parents. She has other four siblings.

Julia Ormond came in the professional acting career from the television commercials. Her first ad was for the cottage cheese after being graduated from London’s Webber- Douglas Academy of Dramatic Art in 1988. Debuted the lead role in 1993 in the film industry, Julia Ormond is also known as Dzhuliya Ormond. She has appeared on screen with many famous stars like Brad Pitt, Richard Gere, Sean Connery, Harrison Ford, etc. She is the very famous name of 90’s decade. Her grace began to fall as her age began to rise up. However, she is in verge of maintaining this again with her role and excellent performances.

Having the height of five feet and 8 inches, she is a classical beauty more than a naughty sexpot. Even at the age of 49, she has amazing body shape. She has maintained her weight to 59 kg with the body measuring 36-25-35. Of course this is a sexy body shape that shows off her beautiful curves. Many fans of her still want to see her flanking off her gowns showing off her sexy body.

Julia Ormond got married to Rory Edwards, an actor, in the year 1989. They met each other while performing in a production of Wuthering Heights. But they got divorced in the year 1994. She became alone for couple of years when she found the Mr. Right of her life in 1994. Julia married a political activist Jon Rubin in the year 1999. She has a daughter with this husband Jon Rubin, named Sophie, who was born in 2004. The marriage got ended in the year 2008. Julia Ormond is single since then. There is no any news or gossips found if she is dating anyone at this time.

Julia Ormond is not just only an actor but she is a social activist as well. She has been an active one fighting against human trafficking since mid 90’s decade. She has partnered with the United Nations Office on Drugs and Crime. She also advocates for Transatlantic Partners against AIDS which raises awareness about AIDS in Russia and Ukraine. She was appointed as a Goodwill Ambassador of United Nations in 2005. She has appeared in many dignified places like United States House of Representatives, Committee on International Relations, Subcommittee on Africa, Global Human Rights and International Operations as the capacity of ambassador. She has established a social organization called the Alliance to Stop Slavery and End Trafficking (ASSET) that helps the mankind fight against slavery and trafficking. Ormond is also a founding co-chairman of FilmAid International.

Julia Ormond is a respectable artist and social activist. One can find her photos on different internet websites. She is active in social networking sites. One can follow her in Facebook and Twitter and get updated with her recent activities and photos.