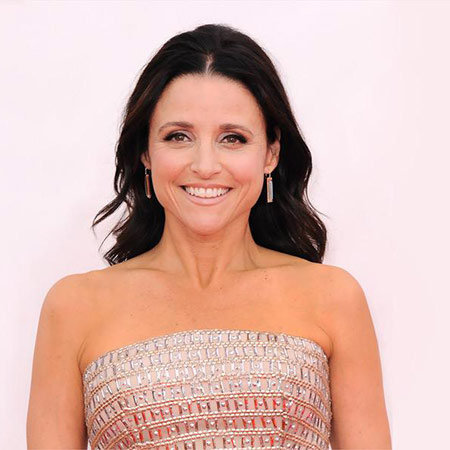 Julia Louis-Dreyfus is an American actress, producer and comedian. She joined ‘Saturday Night Live’ in 1982 and made her debut in a feature film from ‘Hannah and Soul Man and Her Sisters’. Apart from this, it was her portrayal of Elaine on ‘SeinFeld’ that led her to stardom.

Julia Louis-Dreyfus was born on 13 January 1961 in New York City. She is a proud daughter of Gerard Louis-Dreyfus, who chaired Louis Dreyfus Energy Services and Judith. a writer. Her parents got divorced after one year of her birth.

When Julia reached eight years of age, her mother married L. Thompson Bowles, a Dean of the George Washington University Medical College. Julia is the great-great-granddaughter of Leopold Louis-Dreyfus, who founded the Louis Dreyfus Group,  in 1851.

Julia Louis-Dreyfus studied drama at Northwestern University. She started her acting career at Chicago’s Practical Theatre Company and also got an opportunity to perform with the prestigious Second City comedy troupe. However, she got major breakthrough after she migrated to New York. There, she was cast as a regular on ‘Saturday Night Live’ in 1982. She showcased her comic talents for the next two seasons.

Julia Louis-Dreyfus launched her film career in 1986, appearing in Woody Allen’s ‘Hannah and Her Sisters and Soul Man’. However, it was her portrayal of the fabulous Elaine Benes on NBC’s popular sitcom ‘Seinfeld’ that launched her to stardom. The show was massively popular and Julia also won a Golden Globe Award and an Emmy Award for her performance. During her breaks from ‘Seinfeld’, she continued to make films which include ‘Jack the Bear’, ‘Father’s Day’, ‘North’ and ‘Deconstructing Harry’. Similarly, she also lent her voice to the role of princess Atta in the computer-animated film ‘A Bug’s Life’.

In 2002, Julia Louis-Dreyfus starred on her own show NBC sitcom ‘Watching Ellie’. Despite a promising start, the show was not able to gather high ratings and the show was canceled. Afterward, in 2006, she again returned to television with a hit sitcom ‘The New Adventures of Old Christine’. Her performance on the show was outstanding and she even won an Emmy Award for her role.

Julia Louis-Dreyfus also appeared on the HBO TV series ‘Veep’ in 2012, playing fictional U.S. Vice President Selina Meyer. In September, she received her third Emmy Award for her outstanding Lead Actress in a Comedy Series and the honor also marked Julia her 13th acting Emmy nomination, ranking her TV’s most nominated female performers. Since then, she has earned three more Emmys and multiple Golden Globe nominations for her outstanding works.

Julia Louis-Dreyfus married Louis-Dreyfus in 1987. The couple first met while attending Northwestern University.  Similarly, she and her husband are blessed with two sons, Henry and Charles in 1992 and 1997 respectively.

Julia Louis-Dreyfus got into an infamous controversy when she was on the cover of the new issue of Rolling Stone, flaunting her back tattoo. Unfortunately, her back tattoo became an issue piece for all the wrong reasons.

The fake inking looked like the declaration of Independence and US Constitution, which all rolled into one, given the ‘We The People’ intro alongside the signature of John signature.

The current net worth of gorgeous actress Julia Louis-Dreyfus is estimated to be around $3 billion.There is no surprise that she is a billionaire today as she has started her career in the early 80s and has given some exceptional movies to the movie world.