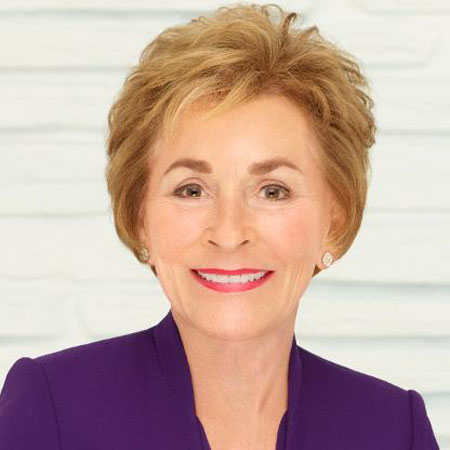 Born in Brooklyn, New York, Judy Sheindlin is an American prosecution lawyer. Best known for her outspoken and fearless personality, she got an opportunity to star on a reality television show Judge Judy in 1996. After the show, she rose to worldwide fame and eventually became one of the highest paid TV stars with the huge salary of $47 million per year from 2013. Similarly, the high-profile television personality was honored with a star in the Hollywood Walk of Fame in 2006.

Judy Sheindlin was born Judith Susan Blum on 21 October 1942 in Brooklyn, New York. She is the second child of Murray Blum and Ethel Blum. She grew up with her three siblings including a brother David Blum.

Sheindlin went to James Madison High School, Brooklyn. Then after she attended the American University, Washington D. C. and graduated with a degree in Bachelor of Arts majoring in government.

An aspired lawyer, Sheindlin enrolled at the NewYork Law School. In 1965, she earned a professional degree in law, The Juris Doctor.

Soon after completing her education, the lawyer, Judy Sheindlin was engaged to a cosmetic firm as a corporate lawyer. As a prosecutor, she prosecuted child abuse cases and domestic violence.

For her fearless and bold personality, she was hired by the New York Mayer Ed Koch as a criminal court judge. Following her success, was promoted as a supervising judge in the family court Manhattan. Because of her strong nature, she was regarded as a tough and harsh judge, but she disagreed with the compliment.

In 1993, Sheindlin was featured on the Los Angeles Times because of her forthright nature and her effort to change the court system for the common good. Soon after, the lawyer was featured on the CBS newsmagazine television show 60 Minutes. Being featured on the popular show, she received wide recognition throughout the nation.

Following her increasing popularity, she was motivated to write a book titled Don't Pee on My Leg and Tell Me It's Raining which was published in 1996.

After retiring from the family court judge, the lawyer was approached to star in a reality courtroom series and she accepted the offer. The court show Judge Judy first telecasted in September 1996 on CBS, the show became a great hit and currently is running its 22nd season remaining number 1 court show.

According to the judge, the series' intention is to inspire people to do the right things and people are absolutely loving the concept of the show, it is the highest rated show of the daytime. The successful show eventually made Sheindlin one among the highest paid entertainers.

From the famous show, Sheindlin was honored with several awards and nominations. In February 2006, She was honored with a star on the Hollywood Walk of Fame. Her show Judge Judy won three Daytime Emmy Awards in 2013, 2016 and 2017.

Apart from her show Judge Judy, she appeared on numerous talk shows and television shows. In 2000, a biography program made a 60-minute doc u mentary video on Sheindlin's overall life.

So far the author Sheindlin has written seven books. Here are the lists of the reality star's books.

Sheindlin also has her own website where she shares ideas regarding various issues.

Being a lead star of the number one daytime show Judge Judy, Sheindlin is paid a whopping amount of money for her appearance on the series. According to the Celebrity Networth, she has a tremendous net worth of $420 million. However, her net worth is $400 and $350 million as per Wikipedia and The Richest respectively.

Sheindlin became the highest paid TV star when she was paid a huge amount of $47 million per year for the reality show, Judge Judy from 2013. Since she works only 52 days per year, her per day salary is $900,000.

The multimillionaire lawyer is an owner of several luxurious houses. In 2013, she brought a condo for $10.7 million in Beverly Hills, Los Angeles.  She also owns a four bedrooms penthouse in Naples, Florida which has an estimated value of $11 million.

The television personality also owns a luxurious super-sized mansion in Greenwich, Connecticut. She purchased the 9 bedrooms and 8.5 bathrooms house back in 2007 for $13.2 million. The mansion is spread in 11,623 square feet.

She previously owned a 152-foot-long yacht named Triumphant Lady. She sold the yacht for $6.9 million.

Judy Blum married Ronald Levy in 1964. The couple share two children; Jamie Hartwright and Adam Levy.  Blum and Levy ended their marriage 12 years of marriage as they divorced in 1976.

The television personality is a supporter of same-sex marriage. She prefers not to be linked with any political institutions, thus, she doesn't hold any particular political values.

Sheindlin is actively engaged in several charitable works. She is the founder, director, and spokesperson of an a s sociation named Her Honor Mentoring Program. Through the union, she helps the young women to build their future by strengthening their practical skills.

Patric Jones, an estranged wife of Judge Judy's executive producer Randy Douthit, filed a lawsuit against Sheindlin in 2013 accusing Sheindlin and Douthit of buying and selling Jones' Christofle fine China. Sheindlin paid $50,815 for the items without Jones' knowledge. Sheindlin returned the tableware and the issue was settled out of the court.

In 2014,  Judy Sheindlin filed a lawsuit against the Hartford, Connecticut lawyer John Haymond and his law firm. She accused Haymond of using her television image without her consent. Later Haymond also filed for a lawsuit for defaming him and claimed he was asked to promote the show, Judge Judy. However, the case was sorted out of the court in favor of Sheindlin.

Here is a video of Judy when she made the appearance on The Ellen DeGeneres Show.