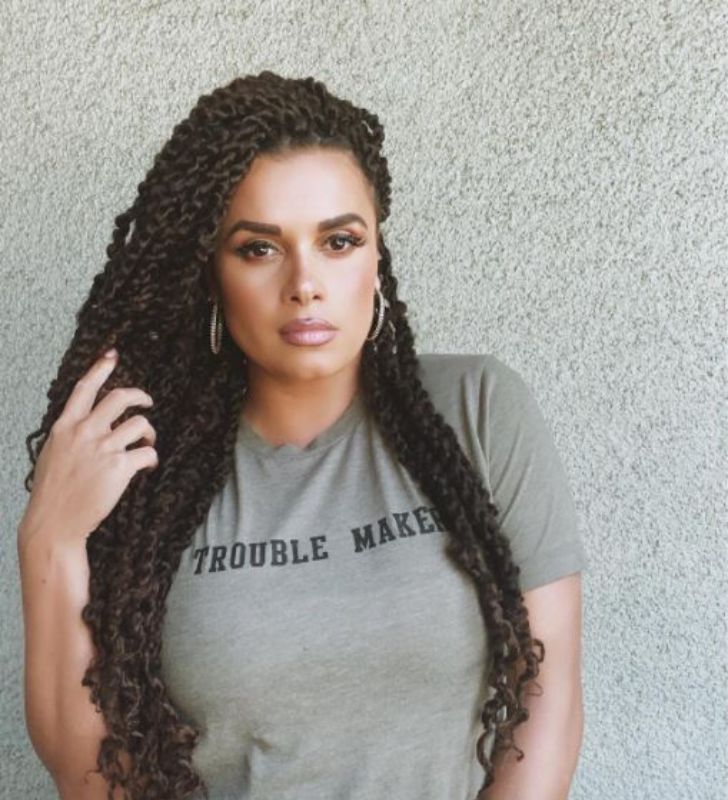 Joy Taylor is an American radio and television personality, currently working as the co-host of The Herd With Colin Cowherd. After joining  Fox Sports in 2016 and has associations with the channel since then, having worked in FS1's show Skip and Shannon: Undisputed. She is also known for hosting Fantasy Football and Thursday Night Live on CBS Sports.com.

The Pittsburgh native began her professional career in her days at Barry University, and no doubt, it earned her fame and fortune. But, seems the success streak didn't follow her love life, as she is already divorced and later broke up her engagement with her fiance.

Taylor was born on January 17, 1987, in Pittsburgh, Pennsylvania. Her parent's names are Anthony Taylor (father) and Georgia Taylor (mother). She grew up along with her brothers: Jason Taylor and Noah Taylor.

Her brother Jason is a former NFL defensive end with 15 seasons in the NFL with Miami Dolphins, New York Jets, and Washington Redskins. He was voted into the Pro Football Hall of Fame in 2017.

An American by nationality, the Fox Sports 1 host comes from a mixed ethnic background (African-American and Caucasian). After attending a local high school in Pittsburgh, Taylor enrolled at Barry University and graduated with a Bachelor of Arts Degree in Broadcast Communications in 2009.

Career From Radio To TV Host

Already with radio stints at WBRY 1640 AM, while at university, Joy began working professionally for began 790 AM The Ticket in Miami. First, she was its executive producer and later became the co-host for the morning show Zaslow and Joy Show.

After 3 years with The Ticket, she joined CBSSports.com as the host of Fantasy Football and Thursday Night Live Today.

In March 2016, Joy Taylor joined Fox Sports 1 as a fill-in for Kristine Leahy on The Herd with Colin Cowherd. Then on August 15, 2016, she became the moderator of the channel program Skip and Shannon: Undisputed, featuring commentators Skip Bayless and Shannon Sharpe.

Then by July 2018, Taylor was appointed as the co-host of The Herd with Colin Cowherd alongside Colin Cowherd.

Net Worth & Salary: Is Joy Taylor A Millionaire?

Yes, thanks to Joy Taylor's decade-long dedication as a radio & TV host, she enjoys the perks of a millionaire. According to Celebrity Net Worth, Taylor has an estimated net worth of $1 million in 2021. From her transition as a radio to TV host, she made a remarkable path to success and increment in payroll.

Since 2016, Joy works for Fox Sports 1 and became the co-host of its show The Herd with Colin Cowherd in 2018. Although she is yet to disclose her earnings portfolio, she allegedly makes a salary in the 6-digit figure (around $100,000 annually). On average, a Fox Sports host gets $40,000 per year while a radio show host can earn $45,020. But both can change accordingly with responsibilities, ability, and location.

Her co-host Colin Cowherd is worth $25 million in 2021 and earns an annual salary of $6 million. Reportedly, he had signed a 4-year contract with Fox Sports/iHeartRadioin 2015 that earned him $4 million a year. Late in 2018, Cowherd extended his contract that increased his payroll to $6 million.

Joy Taylor Was Once Married- Who Was Her Husband? Current Relationship?

Unlike her career progression, Taylor's love life moved through ups and downs. Already a divorcee, Joy was in a marital relationship with Richard Giannotti. Giannotti played baseball minor league for an LA-based team and later became a financial advisor at Global Wealth Management Sports and Entertainment. Moreover, he is the President of Athlete Asset Management.

Reportedly, they met at a conference and were dating for a couple of years before they married in February 2016, in Fort Lauderdale. However, after a year, the duo divorced in 2017.

Following their split, Joy began dating former NBA point guard and head coach Earl Watson. They even got engaged in September 2018 and but broke up in November 2019.

Ever since Joy is low-key about her relationship status and is yet to come up with a dating story. Allegedly, she is single at the moment (as of mid-2021).

An avid Instagram user (@joytaylortalks) with 441K followers, Taylor often shares her professional updates. The black-haired and brown-eyed host is active on Twitter as well; joined in April 2009. Her official Twitter account @JoyTaylorTalks has more than 239.5K followers.