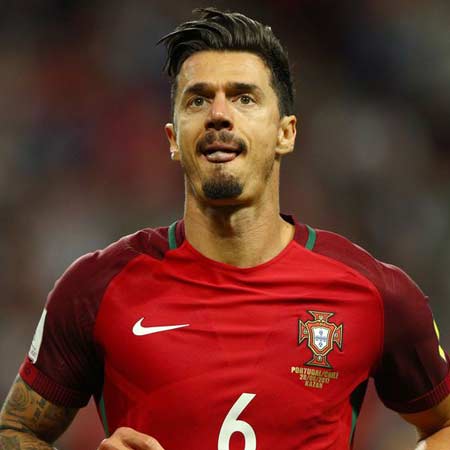 Portuguese professional footballer, Jose Fonte is currently playing as a center back for Chinese club Dalian Yifang D.C. He started his professional career with Sporting CP B then moving to England to join Crystal Palace in 2007. In 2010, he signed a contract with Southampton where he appeared in 288 games scoring 15 goals. The footballer also represented Portuguese national team in several tournaments. He was selected in Portuguese final 23-man squad for 2018 World Cup.

Fonte is a married man and tied the knot with an actress, Cassie Sumner Fonte. The couple shares two children.

Jose Fonte was born Jose Miguel da Rocha Fonte on 22nd December 1983in Penafiel, Portugal. His birth sign is Capricorn. Fonte is Portuguese by nationality and belongs to Caucasian ethnicity/race. His parents Artur Fonte and Diana Rocha raised him with his sibling, Rui Fonte, who is also a Portuguese professional footballer.

Fonte finished his football education at Sporting CP. He played football as a senior in the third division for Sporting CP B.

Jose Fonte started his professional career in 2004 signing a contract with S.C. Salgueiros but the club went under financial liquidation and as a result, his contract was terminated. Fonte was then transferred to F.C. Felgurius and played the 2004-2005 season.

In the offseason, 2005, he made his Primeira Liga debut for Vitoria de Setubal where he attracted the attention of S.L Benfica. As a result in 2006, the club signed him and loaned him out to F.C. Pacos de Ferreira shortly after. By the end of season 2005-2006, he scored 1 goal appearing in 11 games.

Fonto was again transferred on loan to C.F. Estrela de Amadora. At the end of season 2006-2007, he appeared in 27 matches and scored a goal.

Fonte was transferred to Crystal Palace on loan in 2007. Throughout his career in the club, he scored 6 goals appearing in 92 games.

On 9th January 2010, Fonto signed a three-and-a-half-year contract with Southampton for €1.2 million ($1.41 million). The same year, he made his debut for the club along with Danny Seaborne and Jon Ostemobor in a 1-1 draw against Millwall. On 28th August 2010, he scored his first goal in 4-0 win over Bristol Rovers.

In the season 2010-11, he scored 7 goals appearing in 48 games. As a result, he was named in the League One Team of the Year. He was also voted Southampton’s Player of the Year.

First game of an exciting season ahead!!! #wemarchon

In 2011, he extended his contract with the club for further four years. On 19th August 2012, he made Premier League debut in a 2-3 loss match against Manchester City. On 7th October 2012, he scored his first goal in 2-2 draw against Fulham.

Fonte was attacked by his teammate Dani Osvaldo on 23rd January 2014 during a training season. Later, Osvaldo was transferred to Juventus F.C. on loan during the winter transfer window. On 8th August 2014, he signed another new three-year contract with Southampton. He became the captain of the team the same year. On 16th October 2016, he made his 250th league appearance in 3-1 win over Burnley.

On 23rd February 2018, he was transferred to Chinese Super League club Dalian Yifang for €5 million ($5.90 million). He represented the club in two matches.

In 2006, Jose Fonte was called up for the Portuguese under-21 squad for the Vale do Tejo tournament. Fonte received his first-call up to the full side on 3rd October 2014 for a friendly match with France and a UEFA Euro 2016 qualifier against Denmark.

Later, Fernando Santos selected him for Euro 2016 squad. On 25th June 2016, he played his first game in the tournament in 1-0 win over Croatia. He was selected in Portugal’s final 23-man squad for the 2018 World Cup in Russia.

Jose Fonte has an estimated net worth of $1 million, however, the amount is still under review. Fonte earns an impressive salary from his club, Dalian Yifang. When he was in Southampton, he used to earn a salary of €47k ($55415.40) per week.

Jose Fonte is married to his longtime girlfriend, Cassie Sumner Fonte. The couple tied the knot on 21st December 2011 in a private ceremony.

His wife is a model and actress who previously dated Michael Essien, a Ghanian soccer player.

The husband-wife pair, shares two children, a daughter and a son together, their first son, Luca was born on 18th April 2013 whereas their second child, Luna was born in 2015.

Besides, Fonte has a huge fan following in his social media. As of 2018, he has over 328k followers on Instagram.

Here is the video which shows the skills of Jose Fonte: