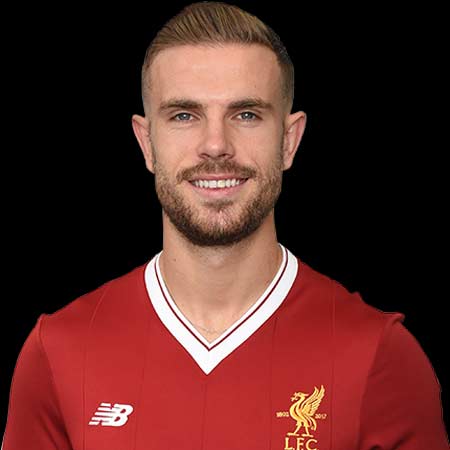 Jordan  Brian Henderson, currently the captain of Liverpool FC in the Premier League is said to be one of the dedicated and hardworking players. He is of English descent and played for the national team in 2009. Henderson was made Liverpool's captain after the departure of former captain Steven Gerrard. He tends to play as a box to box midfielder and usually plays as a central midfielder for England and Liverpool.

Henderson was selected in Roy Hodgson's 23-man squad for the English National Team in the 2014 FIFA World cup and has been selected for the same in the upcoming FIFA World Cup 2018 which will be held in Russia.

Jordan Henderson was born to Brian Henderson and Liz Henderson on June 17, 1990. He was born in Sunderland, England from where his journey as a footballer started.

Henderson attended Farringdon Community Sports College before he was selected in the Sunderland team.

Henderson is regarded as quite a hardworking and dedicated player.  He joined the youth academy of his hometown, Sunderland, when he was just 8 and started playing professionally for the team from 2008.  His first match for the team was with Chelsea when he was just 18 which ended in a 5-0 win for Chelsea.

In 2009, Henderson was sent on a loan to Coventry City for a month and played for the team in the English Champion's League. He played against Derby County which was a 2-1 defeat for Coventry City and later on his loan was extended till the season end.

His first ever senior goal came on February 28, 2009, against Norwich City. The same year he returned back to Sunderland team where he was titled Sunderland player for the 2009-10 season accounting for his consistency and versatility he brought in the matches he played.

He was transferred to Liverpool on June 9, 2011, for a fee estimated to be around £16 to £20 million. His first appearance for the club was at the Premier League of 2011-12 against his former club Sunderland which ended in a draw.

The match received mixed reaction by Sunderland fans. He scored his first goal for the team against Bolton Wanderers. Henderson was appointed the captain of the team in 2015 after the departure of former captain Steven Gerrard. As of date, he has scored 30 goals totaling every game he played for the clubs.

Henderson enlisted in the English national team in 2009. He first played in Under 19 against the Czech Republic then moved onto U21 where he captained the team.

In the senior year, he debuted alongside Steven Gerrard playing as a central midfielder for the team. He has also played for his country in the UEFA Euro Cup 2012 and 2016.

He played in the World Cup 2014 after being selected in Roy Hodgson's 23 man squad and now he will again represent his country in the FIFA World Cup 2018.

Henderson has an estimated net worth of $32 million. He has a personal investment of $17 million and an annual income of $6 million. He owns some luxury cars worth $2 million including his Range Rover, Chevrolet, and his new Ford Mustang.

Henderson resides in his hometown, England where he has a  lavish house costing around $2 million which he bought in 2010.

Henderson is considered a very decent person as he isn't into drinking, smoking or flirting of any kind. He is said to be a one-woman man and is married to his love, Rebecca Burnett. They share a daughter named Elexa Henderson.

Here is a video showcasing skills of Jordan Henderson.