An American Instagram star and model Jordan Craig is popularly known as the ex-girlfriend of Canadian basketball player Tristan Thompson. Craig also has a son with her ex Thompson. The model also runs a lifestyle blog and a personal blog, "Dear Diary." As a model, she has earned a good sum of net worth.

Jordan Craig's Career And Net Worth

Jordan Craig is not active in any profession though she is referred to as an Instagram model. She has 706k followers on her Instagram, where she shares her time from several visiting spots. She also shares her time with her son on her social media.

As per some reliable net worth sites, an Instagram handler with 100k followers can make around $5000 per sponsored post. Craig has over 700k followers from which she can be expected to earn a hefty amount of money. As of 2019, Craig's net worth can be estimated in hundreds of thousands of dollars.

Recently, the court ordered her ex Tristan Thompson to pay her $40k every month as child support for her son, 2. Craig had initially agreed on $15,000 a month in child support, however, she revealed on January 31 deposition that Thompson should have been paying more based on his $16.4 million annual salary.

Talking about Jordan Craig's personal life, she was married to rapper Tyga. In 2019, TMZ obtained court doc u ments that confirmed Tyga, Kylie Jenner's ex-boyfriend, was briefly married to Jordan Craig in 2010, however, they shortly annulled their marriage.

After her separation with Tyga, Craig started dating Canadian basketball player Tristan Thompson. The couple started dating in 2011. Thompson and Craig were expecting their first child together in 2016 when Thompson cheated on Craig with Keeping Up with the Kardashian alum Khloe Kardashian. They welcomed their son Prince Tristan Thompson in December 2016, however, since then, the couple has been separated. 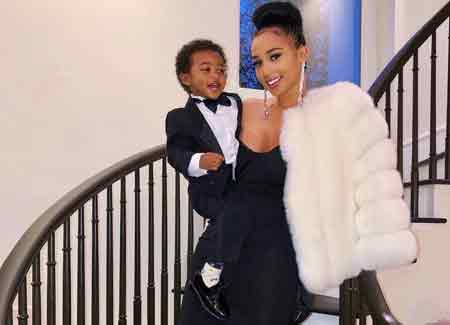 Craig is not known to be in a relationship with anyone since her breakup with Thompson. Thompson, on the other hand, fathered a child, True Thompson, with Khloe Kardashian. But at the time, Khloe was pregnant with their child, Thompson also cheated on Khloe with an Instagram model. Thompson and Kardashian broke up in early 2019.

Height And Other Body Stats