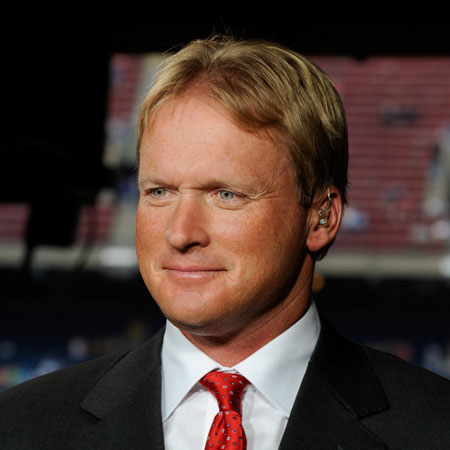 He won the Super Bowl XXXVII in his first season with the Buccaneers in 2003, where they defeated the Raiders. Then he set the record for being the youngest coach ever to win the Super Bowl when he was only 39 years, 5 months, and 9 days.

Jon Gruden was born Jon David Gruden on August 17, 1963, in Sandusky, Ohio, the United States of America to father, Jim Gruden and mother Kathy Gruden. His father was a professional football regional scout, running backs coach, and also the director of player personnel for the Tampa Bay Buccaneers.

He spent most of his childhood in Ohio with his brothers, Jay Gruden and James Gruden. Jay played and coached in the Arena Football League and is a current head coach of the Washington Redskins. Whereas, Jon’s other brother, James, became a radiologist at the Mayo Clinic.

Gruden attended Clay High School located in South Bend, Indiana. Gruden graduated from high school in 1981 and then attended Muskingum College based in New Concord, Ohio. After a year, he was transferred to the University of Dayton. While in Dayton, he was a three-year letterman and backup quarterback for the Flyers. Gruden went on to graduated with a degree in communications in 1985.

Jon Gruden's Career As A Coach And Television Personality

Jon Gruden was interested in football since his childhood and was also passionate about NFL. His father was an NFL coach which might have inspired him to follow a career in NFL. Thus Jon was always motivated to pursue an NFL career. He was a Cleveland Browns fan growing up in Sandusky.

Gruden became the head coach at Tampa Bay Buccaneers from 2002 to 2008.

Gruden joined the ESPN network in May 2009, a year after he resigned as the head coach of Tampa Bay Buccaneers. There he served as a color analyst on the Monday Night Football replacing Tony Kornheiser. Later he also worked as an analyst for the network's coverage of the NFL Draft.

He extended his contract with the ESPN network in 2012 and lengthened his tenure at the network for the next three years. In December 2014, ESPN and Gruden signed a contract for his extension in the network through 2021 which allowed him an out if he wanted to return to coaching. In January 2018, nine years after he stayed away from the coaching career, he made his mind to return NFL as a coach and signed a 10-year contract with the Oakland Raiders, his first NFL team.

According to celebrity net worth, Jon Gruden's net worth is estimated to be around $22.5 million as of 2018. Gruden is noted mostly for being the youngest head coach ever to win a Super Bowl at the age of 39 years, 5 months, and 9 days.

Gruden took a long break from his NFL career and joined the ESPN network where he replaced Tony Kornheiser served as a color analyst on its Monday Night Football. His salary at the ESPN network was $6.5 million annually as reported by Forbes.

The very successful NFL coach was traded to the Oakland Raiders in January 2018. Then, he signed a 10-year contract with the Raiders for $100 million. This confirms he would be receiving a staggering $10 million salary annually.

Jon Gruden is married to his wife Cindy Gruden since 6 July 1991. The couple tied the knot a few years after they started dating. They first met when Cindy was a college cheerleader and Gruden was at the Tennessee Football program.

After a few years of relationship, Gruden proposed to his then-girlfriend with a $1,800 ring. Cindy recalled their traditional engagement days. She said,

The couple subsequently got married after their engagement. The couple has three children. They became the parents for the first time after the two welcomed their first child, Deuce Gruden on 19 January 1994. They have also two children; Michael Gruden, and Jayson Gruden.

It's been nearly three-decade that the pair is still together and living happily with no rumors of divorce.