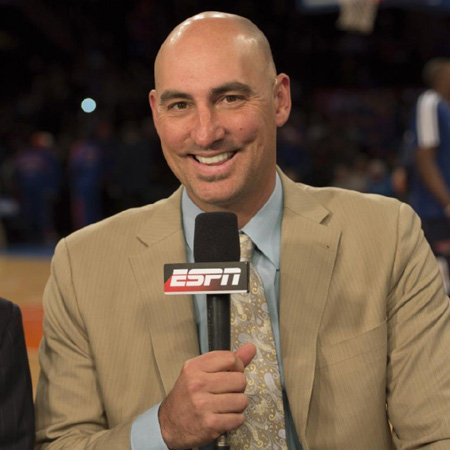 Jon Barry was born on 25th July 1969 in Oakland, California, United States where he spent most of his childhood. He is the son of mother Pam Connolly and father Rick Barry who is a Hall of Famer. His three brothers named Scooter, Drew and Bret all are basketball players.

Jon began playing basketball after being influenced by his father. He played his high school basketball as a shooting guard at De La Salle high School in Concord, California. He joined University of the Pacific in 1987 and played basketball for a year. After that he left to play for Paris Junior College for one year as well. He left Paris Junior because he received a scholarship to attend Georgia Tech in Atlanta, Georgia. While there, he was selected in the first round of the 1992 NBA Draft by the Boston Celtics but Barry refused to sign a contract with them and sat out the season. He went on to join the Milwaukee Bucks. They finished last in Barry’s first year, tied for last in his second year and 2nd to last in their division in his third year in the NBA. From 1996 to 1997, Barry played for Atlanta Hawks and then left to play for Los Angeles Lakers for a year after which he left for Golden State Warriors and then played for Sacramento Kings till 2001. He then played for Detroit Pistons where he had 12 first half in a 3 minute span in the deciding game 5 of the first round of the 2002 NBA Playoffs against the Toronto Raptors. He left Detroit Pistons after the 2002-03 seasons and later went to Denver Nuggets. From 2004 to 2006, Barry played for Houston Rockets. He was released from the Rockets on 1st March 2006 which marked the end of his NBA Career. During his NBA career, Barry earned 4715 points, 1784 assists and .392 3P%.  Barry began as an analyst in ABC after the former analyst Bill Walton had back problems in February 2007. He worked throughout the season. He also works as a basketball analyst for ESPN.

Not much is known about Jon’s personal life due to his reluctance in speaking about his private life. He is focused mainly in sports so the media is unaware about his married life. He is not seen with many women in the public and there are no rumors about his affairs.

Jon is currently 45 years old and has a masculine body. He is 6 feet 4 inches tall and weighs 88 kgs. His net worth is estimated to be nearly 2 million dollars which suggests that is salary must be high. Although Barry has not achieved any significant award in his life time, he is admired by his viewers and the people he works with.