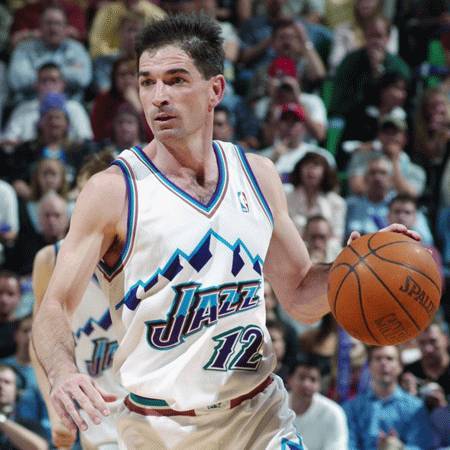 Stockton was born on 26th March 1962 in Spokane,Washington where he spent most of his childhood. He is of Irish and Swiss German ancestry.

Stockton attended Gonzaga Prep High School in Gonzaga where he began playing basketball. Later he decided to join Gonzaga University and play college basketball for Dan Fitzgerald thus becoming the third generation in his family at GU. During his senior years, Stockton went on to play for the Bulldogs in 1984 and averaged 20.9 points per game thus leading the West Coast Athletic Conference in scoring assists and steals. John then announced that he was ready to play for the NbA and thus was selected by Utah JKazz in the first round of the 1984 draft as the 16th overall pick. He then began playing sincerely for Utah Jazz. During his NBA career, John averaged a career double-double with 13.1 points per game and 10.5 assists per game. He thus holds the most number of career assists with 15806. John also recorded the most career steals with 3265 and had five of the top six assists seasons in the entire NBA history. He went on to play a total of 38 games where he gained 20 or more assists. John announced his retirement from the NBA on 2nd May 2003. For his exceptional contribution to the Jazz, a retirement ceremony was held by the Utah Jazz for him. During the ceremony, the Salt lake City renamed one of the street in front of the EnergySolutions Arena as JohnStokton Drive. For his excellent playing, Stockton is considered as one of the best point guards of all time. He held the records for the most assists and steals during his career.

Stockton married Nada Stepovich in 1986 and they currently reside in Spokane, Washington with their two daughters named Lindsay and Laura and four sons named Houston, Michael, David and Samuel. Almost all of his children play basketball in various colleges and NBA teams. The couple has been going strong for many years without any rumor of divorce or extra marital affair. John released his autobiography named Assisted in 2013. He has coached many teams and trained many basketball names. He is also involved in numerous businesses.

Stockton is currently 53 years old , weighs 79 kgs and is 6 feet 1 inch tall. During his basketball career he has gathered a lot of achievements. He was named NBA All-Star Game MVP in 1993, 6x All-NBA Second Team, 5x NBA All-Defensive Second Team, 9xNBA assists Leader, 2xNBA steals leader, NBA all-time assists leader, NBA all-time steals leader and more. His no.12 jersey was retired by Utah Jazz and Gonzaga University. Stockton played in the 1992 Barcelona Olympic Games and won a gold medal. He also played in the 1996 Atlanta Olympic Games and won another gold medal with his team. John is a well known name in American basketball history.