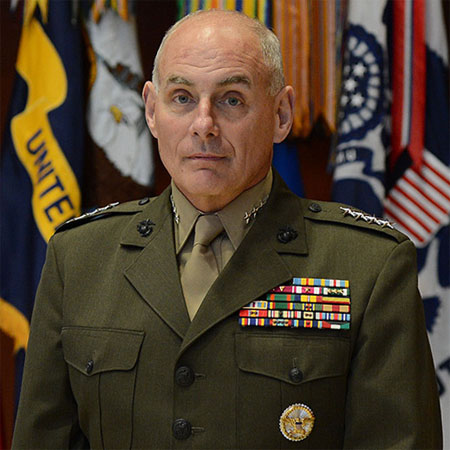 John Francis Kelly is the present White House Chief of Staff for U.S. President Donald Trump. Previously, he worked as the U.S. Secretary of Home Security in the same administration.

Kelly was born on 11 May 1950, in Boston, Massachusetts, U.S.A. He was born in an Irish Catholic family and was raised in the Brighton. Before he was sixteen, Kelly hitchhiked to Washington state and took the trains back from Seattle to Chicago.

Kelly is White in ethnicity and holds American nationality.

In 1987, he moved to the Basic School in Quantico, Virginia and began his work as the head of the Offensive Tactics Section, Tactics Group, and later took the responsibilities of the Director of the Infantry Officer Course.

After three years of teaching young officers, Kelly enrolled into the Marine Corps Command and Staff College and the School for Advanced Warfare. Both of the school are located in Quantico.

In 1999, he was shifted to joint duty and worked as the special assistant to the Supreme Allied Commander Europe in Belguim. In 2001, he returned to the United States and was appointed to a third tour duty at Camp Lejeune.

In 2002, Kelly again worked with the 1st Marine Corps colonel in an active combat zone. The following year in April, he took the command of the newly formed Task Force Tripoli and headed it north from Baghdad int Samarra and Tikrit.

As the major general, Kelly's next task came in July 2007, as a commanding general, I Marine Expeditionary Force. On 9th Feb 2008, he was the command of the Multi-National Force-West in Iraq, replacing Major General Walter E. Gaskin. In Feb 2009, Kelly returned to the United States, after a year in Iraq.

In April 2017, in a speech at George Washington University, Kelly said,

If lawmakes do not like the laws they've passed and we are charged to enforce, then they should have the courage and skill to change the laws. Otherwise they should shut up and support the men and women on the front lines.

On 28 July 2017, Donald Trump, assigned John Kelly to the post of White House of Staff, replacing Reince Priebus. On 31 July 2017, Kelly took the post, after a chaotic internal power struggle between him and Priebus.

In October 2017, Congresswoman Frederica Wilson criticized Trump for his phone call to the widow of a slain U.S. soldier, saying his remarks had been insensitive. After few days, Kelly had a press briefing where he defended Trump's call, saying Trump ''expressed his condolences in the best way he could.''

Kelly's youngest son, Robert Kelly, was killed at the time of patrol in Sangin, Afghanistan. He was forwarding the platoon and stepped on a hidden land mine.

John Kelly, White House Chief of Staff,  has a total net worth of $ 4 million.