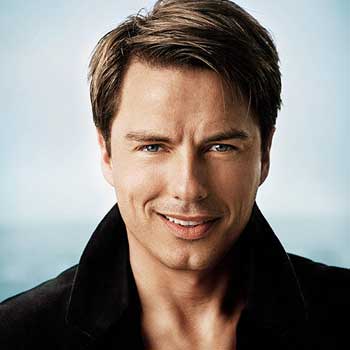 The tall Scottish-American actor, John Scot Barrowman is well known to viewers for his role in the BBC Science fiction drama Doctor Who and Torchwood. John is an excellent actor, singer, dancer, presenter, and writer.

John has appeared not only in many TV Series but also movies like De-Lovely, The Producers, the Sound of Musicals and more. Barrowman has written a few memoirs and autobiography. She has also taken part in many Theater acts including Anything Goes, Rope, A Few Good Men and many more.

Born on 11 March 1967 in Glasgow, Scotland, John Scot Barrowman and his family emigrated to the United States in 1975. John possesses both British and American citizenship.

John is the youngest of three siblings. John’s mother was a singer and his father was employed by the Caterpillar heavy machinery company in Uddingston. Later in Joliet, Illinois, John attended Joliet West High School where he was highly inspired by his English and music teachers to search and pour out his inner artistic potentials.

John was moved into a Gifted Program by his English teacher and there he was continuously coached for the school's speech team. John won parts in numerous musical productions like Oliver!, Camelot, Hello and Anything Goes.

John’s father arranged for him and his siblings, jobs like shoving coal from an Illinois Power company in order to give them the taste of manual labor.T us, John worked in the power company for the entire summer of his senior year.

Later in 1985 John graduated his high school and became a naturalized citizen of the US. Then John moved to San Diego, California to study performing arts at the USIU (United States International University). Later in 1989, he returned to Britain, as required by the program to study Shakespeare for six months.

Unlike other actors, John did not jump directly into the big screen. John started his acting career at the Prince Edward Theater, West End, London in 1989 where he played the role of Billy Crocker in Cole Porter’s Anything Goes.

John then starred in musical comedy stage productions of Cinderella at the New Wimbledon Theater, Aladdin over Christmas 2007-2008 and also as a guest act for the Royal Variety Performance at the London Palladium in 2008. He also played the lead Robin Hood for the 2008-2009 seasons.

John was not only in Theater but he soon emerged as a TV Presenter as well becoming an original host of a children’s Saturday morning variety show, Live and Kicking on the BBC. John also reported on technology news as the host of Electric Circus segment of the show.

From 1994 to 1996 John appeared on the children’s television game show, The Movie Game. John was also in the judging panel on BBC One’s music talent show How Do You Solve a Problem like Maria? Again in 2007, John was a judge on the BBC One TV series Any Dream Will Do.

Then the very next year, John presented primetime BBC game show called The Kids Are All Right. In the summer of 2012, John hosted This Morning. Recently on 17 February 2014, John was seen in the daytime Channel 4 show Superstar Dogs: Countdown to Crufts.

John Barrowman was seen in primetime Drama’s like Central Park West from 1995-1996, Titans from 2000-2001, and most importantly in Doctor Who from 2000-2010 as a character, Captain Jack Harkness, an omnisexual time traveler from the 51st century.

During the time he became very famous for his role and got his own show named Torchwood which was a spin-off series featuring a team of alien hunters which was premiered in 2006. He appeared in Torchwood till 2011. He was seen in TV Series like Animals At Work from 2008 to 2011, in Tonight’s the Night from 2009 to 2011.

In December 2010 John was called by the directors of American musical-comedy drama series, Glee. John had hoped to be a part of the cast and crew and wanted to become one of the teachers in Glee, he also called himself a “Gleek”. But unfortunately, John did not become a part of Glee.

John Barrowman joined the TV Series, Arrow in 2012 and is till date playing the negative character Malcolm Merlyn. John acted in the movies like De-Lovely (2004), The Producers (2005), The Sound of Musicals (2006), and also had a minor role in American action thriller war film, Zero Dark Thirty.

As of 2018, he has an estimated net worth of $4 million, as per celebrity net worth.

With a height of 6 feet and a masculine voice and body, nobody would believe that John Barrowman is gay. But John is openly gay and his partner is Scott Gill. He met husband Scott during the production of Rope in 1993.

John and his boyfriend Scott had a wedding on December 27, 2006, when they entered into a civil partnership. They were then legally married in the state of California on July 2, 2013. John has both an American and a Scottish accent. John also works in gay rights organizations.

John is 47 years old and is famous in all sites including a wiki. Even at this age, John Barrowman is a well maintained and an active man who is still performing exceptionally well in the acting arena.