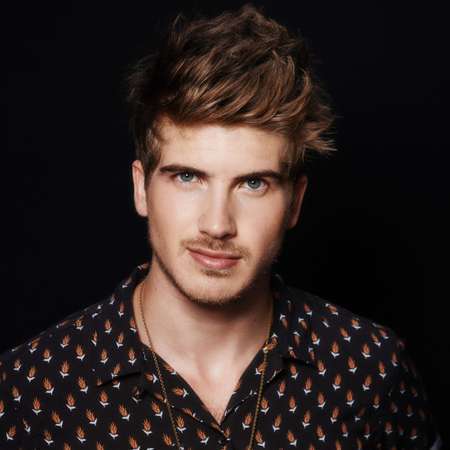 Joey Graceffa is a famous Youtube personality, recently an actor. He has more than 1 billion subscribers on his two channel combined, the channels was JoeyGraceffa and Joey Graceffa Games. Joey was born on 16th May 1991 in Marlborough, Massachusetts, USA. His parents are Debbie O'Connor and Joe Graceffa, he has one brother named Jett and one sister named Nicole. He is American by nationality and belongs to white ethnicity.

Joey Graceffa was educated at Marlborough High School in 2009 and later film at Fitchburg State College, but he left the college after attending one year.Graceffa began started uploading videos on Youtube when he was 16 years old, with his high school friend and a classmate named Brittany Joyal on their channel called WinterSpringPro. Later, in2009, he began uploading videos own his own in his new channel JoeyGraceffa. He joined YouTube network 'StyleHaul' in 2013.

Joey Graceffa , in 2013, participated in a reality show 'The Amazing Race' with his fellow YouTube personality Meghan Camarena on the 22nd season. They were eliminated on the tenth leg and Garceffa, in his interview said: “There were a lot of bad times but it was definitely good overall. It was an amazing experience, and I'd love to do it again." . Graceffa and Meghan again teamed up on the 24th season and competed in 'The Amazing Race:- All-Stars.

Joey Graceffa  was nominated for two awards at the 2014 Teen Choice Awards. He won "Best Male Actor in a Dramatic Web Series" at the 2014 Streamy Awards for his portrayal of Hunter Crowley in Storytellers. Common Sense Media named him as one of "10 YouTube Stars Your Kids Love".

Joey Graceffa, in March 2015, appeared in an episode of the CONtv reality television project created by fellow YouTube personality Justine Ezarik called ' Fight of the Living Dead'. On May 16, 2015, Graceffa released a song with a music video called "Don't Wait" that was widely shared on Twitter and other social media and received positive reviews. It tells a fantasy fairytale story that features goblins, a witch, and a prince. The video ends with Graceffa, dressed as a prince, kissing his male co-star. By December 2015, it had received more than 15 million views.

On May 18, 2015, Graceffa officially announced on YouTube that he is a gay. Graceffa further added the reason he waited so long to come out online was because "There was a lot of hesitation to come out online because of growing up in my town: It wasn't acceptable to be gay; it was looked down upon." He also went on to state that after coming out, "I definitely feel more open and free with who I am, and I think that's inspired a lot of other people to also do the same and have come out to their friends and family."

On May 19, 2015, Graceffa released a memoir titled In Real Life: My Journey to a Pixelated World, published by Simon & Schuster. In the book, he discusses being bullied and feeling lonely in school, his family background such as his mother's alcoholism, his brother's autism, how he began his YouTube career and his road to self-acceptance, among other topics. His book was a New York Times Best Seller on the "celebrities" list in July 2015 and the cover was updated to acknowledge this achievement.

Joey Graceffa  is 5 feet 11 inches in height and currently living in California. His net worth is estimated to be around $700,000 and gets nice perks of salary.