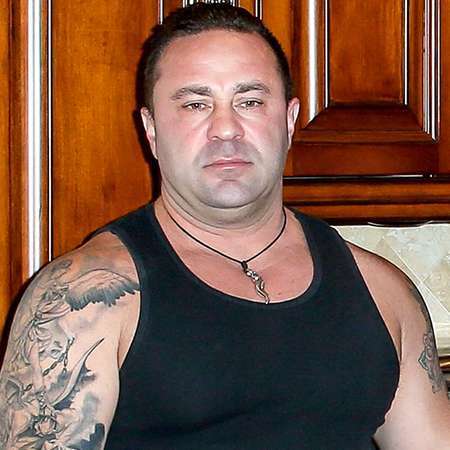 Joe Giudice is an Italian reality television personality, businessperson and entrepreneur. He recently parted ways with his wife Teresa Giudice after 20 years of marriage. The pair shares four children together.

Joe Giudice was born on 22 May 1972. His real name is Giuseppe Giudice and was born in Sonoma, Italy and brought to Paterson, New Jersy, USA, as a child by his parents. He is known for his appearance on The Real Housewives of New Jersy and a TV series The Apprentice.

Giudice's private construction company G & G Stone & Stucco has four staff and their company's annual income is about $500,00 to $1 million. But living his life lavishly in 2010, she was caught carelessly and drunk driving and was charged a huge amount of money and his driving licensed was ceased for 9 years.

Joe Giudice opened a pizzeria in 2009 but after running for a while it was immediately unsuccessful and lives with his wife's earnings. In 2009, Giudice filed for bankruptcy, stating that he was $11 million in debt. However, he withdrew the bankruptcy in 2011 and his wife told that she would pay $8 million of debts within a year.

Unfortunately, Joe Giudice and Teresa were charged with more than 50 counts of fraud with 39 federal fraud on July 29, 2013. They appeared on court and Giudice was jailed for 41 months while his wife for 15 months. They were convicted of bankruptcy fraud, mail, and wire and entered federal prison on January 8, 2015, and Giudice is sent to Fort Dix prison in New Jersy.

In June 2016, US Weekly magazine revealed that Giudice is struggling behind the bars Joe Giudice is having a hard time behind bars. Unlike his wife, Real Housewives of New Jersey star Teresa, 44, who stayed Zen through her 11-month jail sentence thanks to yoga, "Joe is struggling," -Us Weekly

According to TMZ of January 2016, Teresa was hit with a tax lien for $23,365 in February, just two months after she got sprung from prison. Of course, Joe started his 41-month prison stint in March ... but still managed to get nailed in April for $238,269 of unpaid taxes.

Net Worth of $11 Million

Their conviction spread widely causing many people to criticize what they have done. Some people on social media say they can not handle their fortune and fame. Before he ran into debts, his net worth was estimated to be $11 million USD with a large salary income.

Joe Giudice met his wife Teresa during their high school and married in the year 1999. Together they shared four daughters named Gia, Gabriella, Milania and Audriana.

His wife is infamous for her lavish lifestyle and exceedingly spreads of her financial and legal issues which lead her 15 months sentence to prison.

Split From Wife After 20 Years of Marriage

In December 2019, multiple sources confirmed that Joe and Teresa had parted ways after 20 years of marriage.

Just two months after the split, in January 2019, Joe was spotted partying with a group of women in Mexico.