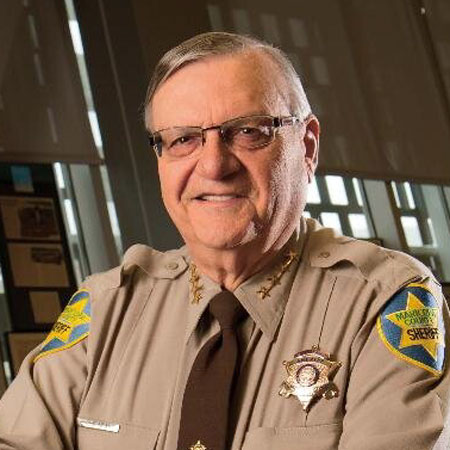 Joe Arpaio is known for his 24 years long service as Sheriff of Maricopa County.

Joe Arpaio was born on June 14, 1932, as Joseph Michael "Joe" Arpaio. Arpaio was born in Massachusetts, United States. Arpaio is the son of Nicola Arpaio. His parents were both of Italian descent. And Arpaio was raised in Springfield by his father as his mother died giving birth to him.

Arpaio’s nationality is America and his ethnicity is Italian American. Arpaio helped in his father's business until he was 18.

Joe Arpaio after his high school, he joined the United States Army in 1950. Arpaio served in the Medical Department till 1954. In four years of his service in the Army, he was stationed in France for part of the time as a military policeman.

After his discharge, Joe Arpaio shifted to Washington, D.C and started working as a police officer. In 1957, Arpaio served as a police officer in Las Vegas, Nevada for about six months. And later he was appointed as a special agent with the Federal Bureau of Narcotics currently known as DEA (Drug Enforcement Administration). During his service at DEA, he was stationed in Mexico, Turkey, and Argentina.

After he left 25 years long service in the DEA, Arpaio along with his wife became involved in a travel venture. Arpaio worked in his wife’s travel agency Starworld Travel Agency. Arpaio was elected as Sheriff for the first time in 1992. And since then he was been re-appointed as Sheriff several times in 1996, 2000, 2004, 2008 and 2012. Arpaio has also served as law keeper and lawmaker.

Arpaio has also been featured in the films including American Drug War: The Last White Hope and America's Toughest Sheriff. Arpaio has authored books which focus on drugs and law enforcements.

Joe Arpaio’s current relational status is married and he was married to his girlfriend turned wife, Ava Arpaio in 1958. This couple has been married for about 59 years and their marriage took place in as a private event. Joe and his wife Ava have two children and four grandchildren.

The couple met on a blind date in Washington D.C. and were introduced by Ava's friend. Ava later invited him for a dinner at her apartment. She liked him from the first meeting and still has a very relation with him.

Ava ran a travel company for many years previously and is an owner of a commercial real-estate at present.

Arpaio currently lives with his wife in Fountain Hills, Arizona, United States. Arpaio has kept his personal life details under darkness and has not revealed much about his past dating and affairs.