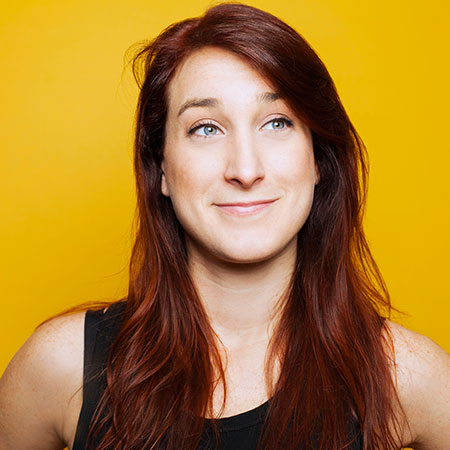 Joanna Hausmann is a Venezuelan-American writer, comedian, and actress who rose to fame from YouTube and Univision's bilingual platform. She is well known for her comedy videos and skits who also starred on the Netflix's series Bill Nye Saves the World.

Hausmann was born in Leamington Spa, Warwickshire, England on 20th March 1990 under the birth sign Pisces. She was born to parents, father Richardo Hausmann who is an economist at Harvard University, and mother, Ana Julia Jatar, a journalist.

She belongs to Venezuelan nationality and is of Latin-American ethnicity. Joanna also holds American citizenship.

She is a graduate of Tufts University.

Joanna started her career at an early age. The 29-year-old  (2019) comedian initially started her career from making comedy videos on her YouTube channel. She also participated in the Comedy Studies Program which was noticed by the Second City Theatre. Joanna has appeared in Mary Scrugg's Works twice thereafter.

She is also a performer at The Upright Citizens Brigade Theatre which is located at New York City. Joanna was featured as a correspondent on the Netflix series Bill Nye Saves the World. The show was premiered on 21st April 2017. She also voiced Disney Channel's Milo Murphy's Law.

Joanna was awarded Comedian of the Year at the 2016 Tecla Awards and got nominated for the Best Humor Series Shorty Award. In 2018, Joanna was honored by the award in Excellence in Online Story by National Hispanic Media Coalition.

Joanna Hausmann's Net Worth And Earnings

The talented comedian, Joanna has made a fortune from her career. Although her salary is under review, sources estimated her net worth to be in millions.

Moving on to her personal life, Joann is a married woman. She tied the knot to her longtime boyfriend, Daniel Panebianco on May 28, 2018. The couple started dating a long time back before tying the knot.

Joanna has shown no plans on having a baby currently, hopefully, in near future the pair will add a new member to the family.

Taking about her online presence as of early 2019, Joanna has over 201k subscribers on her YouTube channel. Likewise, she has over 121k followers on Instagram, and over 44.7k followers on Twitter.

Here is a video of Joanna Hausmann talking about comedy in Spanish.