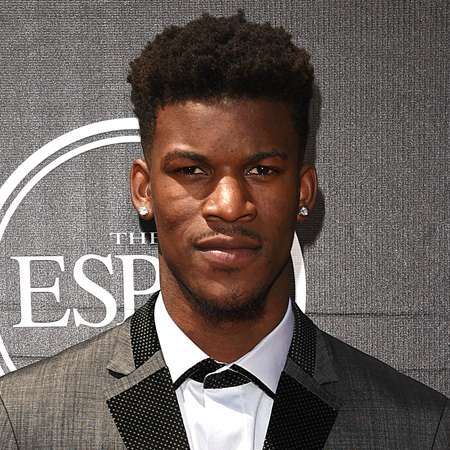 Jimmy Butler is a famous American professional basketball player for the Chicago Bulls of the National Basketball Association. He was born on September 14, 1989, in Houston. He was raised in Tomball, Texas and used to play college basketball for Tyler Junior College and Marquette University. In 2015 he was named as the NBA most improved player. He was drafted with 30th overall pick in the 2011 NBA draft. He is three-time NBA All- Defensive Team and two-time NBA All- Star honoree.

At the early stage of his basketball career before his senior year at Tomball High School, he averaged 10 points per game. However, as a senior player and a captain of a team as well in 2006 to 2007, he averaged 19.9 points and 8.7 rebounds per game and additionally, also voted as the most valuable player of the team.

Butler attended Tyler Junior College in Tyler, Texas and focused on his basketball games. In his one of the season at Tyler, he averaged 18.1 points and 7.7 rebounds which were enough to catch the eye of Buzz William who was a Marquette coach at that time. Williams brought Butler to Milwaukee to play with such Golden Eagles stars, Lazar Hayward, and Wesley Matthews.

He continuously improved his skills at Marquette. His statistical and visible improvements put him on NBA radars. After a rough start in the few seasons, he had his coming-out party in 2012-13 seasons when a Deng injury allowed the second-year player more playing time. In that season, he averaged 8.6 points in 82 games which were simply implacable. Currently, Butler is one best basketball player because of his hard work and dedication towards basketball.

Unlike, his professional life his personal life was very disturbing for him. His father, Jimmy, left him when he was an infant. His mother raised him but when he was 13 years old his mother kicked him out the house. In of the interview with ESPN.com, he said that his mother put him in the street saying that she didn’t like the look of him. He was very helpless at that time. He spent his moving to his friend’s house one by one as he didn’t have any place to live.

One of his friends was Jordan Leslie, who was a freshman at a basketball camp. The two got along really well and he moved in with him to his house. One of the NBA general managers said about Butler that “His story is one of the most remarkable I’ve seen in all my years of basketball.” Even after his dark personal life he overcame with it so beautifully and became one of the best basketball players.

Currently, he is happy at his status with an amazing net worth of $2 million and satisfactory salary. He is a very active player with a great height of 6 feet and 7 inches. He is now at the top of his career gaining a lot of appreciation as well as endorsing Jordan brand shoes and much more.  Currently, there were some of the rumors that Bulls might trade Butler in the new season but there is no official confirmation about it. However, we wish him all the best for his future.  To know more about him his contract, highlights of the game, his stats they all are available in his bio and in the wiki.