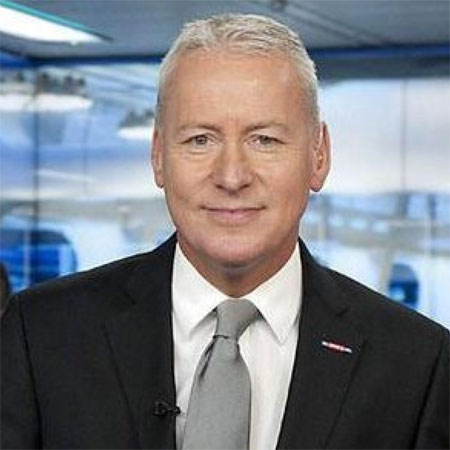 Jim White was born in 1957 in Glasgow, the United Kingdom. He attended Edinburgh Napier University.

Jim White's career began after completing a pre-entry journalism course at Napier College in Edinburgh, as he began working with Scottish & Universal Newspaper in the year 1974.

Later in 1979, White rolled into television as an entertainment reporter on STV flagship Scotland Today program. In 1988, White became the primary host of Scotsport.

He also presented coverage of Scotland's campaign in the 1990 World Cup Finals in Mexico, whereas he became part of the team in 1991, that won a Scottish BAFTA.

In September 2016 Jim White took over Talksport's 10 am to the 1 pm slot from Colin Murray, as the move followed News Corp's purchase of the talk radio group, also was seen as an early indication of integration of Talk Sport into the Sky/News Corp sports media business.

Jim White is married. He is married for the second time with the oldest friend, Avril who is 43 years old and a reporter too.

One day Jim invited Avril to London, where Sky Sports is located. After a couple of months, White decided to make Avril his wife. Later Jim White went down on a bent knee and proposed Avril before whisking to France.

He gave a platinum engagement ring with five diamonds, as he claimed the only problem was finding a perfect date for the wedding.

The couple was about to get married in January but, due to games going on, it was not possible for them. Later they decided a fortnight ago to go for the 12th February. Avril claims that her wedding was fantastic, as it was the best day of her life.

They had Avril's sister and her husband as a witness. Avril already had two children from her first husband; however, Jim agreed, and later the couple decided not to make any immediate plans to start a family.

Jim White was previously married to Fiona, but the couple got separated after ten years of marriage. White blamed Fiona for the reason behind their divorce.

After his divorce from his first wife, he was again caught having an affair with a camerawoman named Susan Barrett. Unfortunately, the couple could last only for two years.