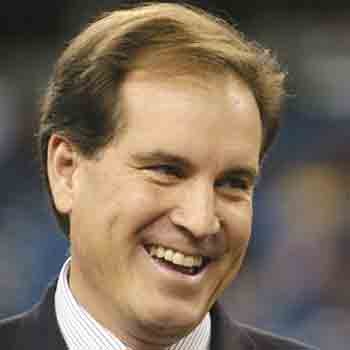 James William Nantz, III, popularly known as Jim Nantz is an American sportscaster who has worked on the telecasts of the National Football League (NFL), National Collegiate Athletic Association (NCAA) Division I men’s basketball and the PGA tour for CBS Sports since the 1990s. Jim had joined the NFL network in 1985. Jim has been working as the NFL announcer on CBS’s top play-by-play since 2004 till present. Jim is the name of the very talented and popular sportscaster in sports journalism. He has been the winner of Emmy Award for three times and five-time National Sportscaster of the Year. This proves his professional efficiency and his dedication towards his work. Jim enjoys the high net worth of 15 million US Dollars as of 2014 and also the high salary.

Born in Charlotte, North Carolina in the year 1959 May 17 from parents Doris Nantz and Jim Nantz Jr., he grew up in New Orleans, Louisiana, and Marlboro, New Jersey. He has attended Marlboro High School and graduated in broadcasting from the University of Houston in Texas.

While in high school, he was co-captain of the basketball team and co-captain and number one player on the golf team. He was also a member of Bamm Hollow Country Club. From University, he had played on the Houston Cougars men’s golf team.

After graduation, he worked at KSL-TV in Salt Lake City as an anchor and sportscaster. Afterward, he got the chance to work in CBS Radio Network as a sportscaster, transmitting taped interviews to Win Elliot for the latter’s Sports Central USA weekend reports.

Jim joined the CBS in 1985 where he worked with Clark Kellogg and Billy Packer.  He initially worked as a studio host for the network’s college football and basketball coverage. He also worked as an on-course reporter for PGA Tour golf as well as calling NFL games on Westwood One from 1988-1990 and later moved to television.

Jim had hosted CBS’s pre-game program The NFL Today from 1988-2003 and became the top play-by-play announcer 2004. He has been the host for the coverage of NFL’s The Master's golf tournament for the 27th time since 1989.

When it comes to golf, Tiger Woods is the prominent one and in the 27th session, he talks about the absence of Tiger Woods.

Jim beside being active in sports media, he has appeared in the several television episodes which include The Price Is Right to present Showcase prize. He also appeared as himself in 1996 movie Tin Cup and television series like Arliss, Yes, Dear, Criminal Mind and How I  Met Your Mother (in season 5 episode 14).

He also appeared as the announcer for the fictional baseball team in short-lived series Clubhouse. He was a guest commentator for the final round of The Open Championship for BBC. In 2013, he appeared in Papa John’s Pizza advert.

Jim Nantz's net worth is $15 million at present. He earns an annual salary of $5 million from his career.  He is one of the youngest recipients of the Basketball Hall of Fame's Curt Gowdy award for broadcasting. Before his divorce with his ex-wife Anne-Lorraine Carlsen, he also bought a $12,000 necklace for her.

After their divorce was finalized, the court ordered to him to pay $1 million his ex-wife until his death or his wife re-married.

Nantz was honored the Ambassador Award of Excellence by the LA Sports & Entertainment Commission in 2012 for his involvement in the community.

He was also named as the recipient of Pete Rozelle Radio-Television Award from Pro Football Hall of Fame. He has also received an honorary Doctor of Humane Letters from the University of Houston in 2011 as well as he has been one of the youngest recipients of Basketball Hall of Fame’s Curt Gowdy Award.

Also, he has been awarded the Ambassador Award of Excellence by the LA Sports & Entertainment Commission in 2012.

Jim Nantz is a popular TV Buddy and has been 60 years old by 2019. He is a successful and rich sportscaster. Partnering with wine producer Peter Deutsch, he has launched a private wine label The Calling with its first vintage released in 2012.

Talking about the personal life of Jim, he was married to Ann- Lorraine “Lorrie” Carlsen Nantz in 1983. The couple lived together in Westport, Connecticut happily for 26 years. Due to some issues, they decided to part ways.

Jim divorced his ex-wife in 2009 and this couple has a daughter named Caroline. Meanwhile, he was dating with his girlfriend Courtney Richards and in a sense; this has been the cause for their divorce as well.

Following the love affair, the two, Jim and Courtney got married on June 9, 2012, in a wedding ceremony that took place at Pebble Beach Golf Links in Pebble Beach California. Courtney gave birth to a baby girl on March 14, 2014. They have named her Finley Cathleen Nantz.