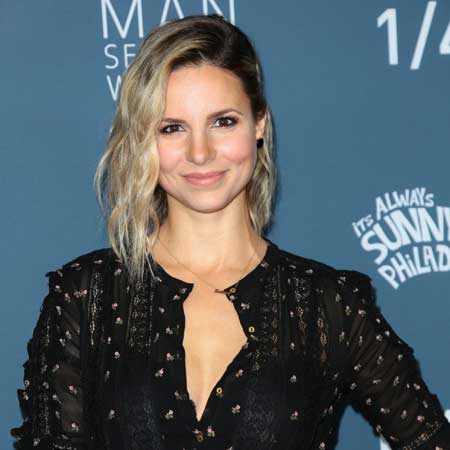 Jill Latiano is an American actress, dancer, model and TV personality famed for her role in the cheerleading comedy Fired Up! Professional since 2003, Latiano has appeared in numerous TV series including Ugly Betty, Darke & Josh, Moonlight, and Casual. However, among people, she is known as the wife of American actor turned producer Glenn Howerton.

Born on September 17, 1981, in Manhattan, New York City, Latino belongs to white ethnicity and hold American citizenship.  Her zodiac sign is Virgo. She spent her early childhood days in her hometown Manhattan with her family.

Her late father's name is Bob Latino who died in 2016. She dedicated Season twelve eighth episode ‘It's Always Sunny in Philadelphia’ to his father's memory.

There is no information regarding her education in the media as well as the internet.

Initially, in the 1990s, Jill Latiano commenced her career as a dancer for the NBA team the New York Knicks. Later in 2003,  she transited her career from dancing to TV career with her appearance as the host of NYC Media series Fashion in Focus, where she worked till 2005.

Having worked with the stars like Drake Bell, Daniel Sunjata, and  Alan Dale, Jill Latiano also made her appearance in the films like Epic Movie (2007), Lower Learning (2008), and Fired Up (2009).

Lastly, Jill appeared in the American television comedy-drama series Casual in 2015. She is MIA since then and her current update on her profession is yet to be disclosed.

Jill Latiano's Net Worth And Salary

Jill's major source of income is her multiple professions like acting, modeling, and dancing. As a model, Latiano is paid over $65,000 a year.

The American TV actress turned dancer Jill Latiano is married. Jill is currently living with her husband Glenn Howerton and shares 2 children. The couple exchanged vows on September 8, 2009, in a private ceremony following 9-months of their engagement.

As for a fact, after 2 months of their marriage, Jill guest-starred in Howerton's series It's Always Sunny in Philadelphia, playing a love interest to his character in the episode "The D.E.N.N.I.S. System". Neither of the couples is reported to have any past affairs.

After 2 years of their marriage, Jill and her husband Glenn welcomed their first child son Miles Robert on September 12, 2011, at the age of 29.  Later at the age of 32, Jill welcomed her second child with her husband in August 2014 and named him Isley Ray.

Today is a perfect day for a #MomCrush!! The lovely and inspirational Jill Latiano Howerton , exec producer of the amazing doc u mentary #GMOomg (and Homebirthing Mama of 2!) answers my #EightByEva questionnaire!! || Link in bio || #HappilyEvaAfter

Neither of the duos is reported to have any past affairs and divorce mishaps. They are happily married for nearly a decade and the family of 4 currently lives in Los Angeles, California.

Jill Latiano is active on social media where she has over 7K followers on Instagram and 3K followers on Twitter as of November 2018.

In 2016, Glenn's father Bob Latino died at the age of 71 and the 8th episode in the 12th season of It's Always Sunny in Philadelphia was dedicated to his memory.