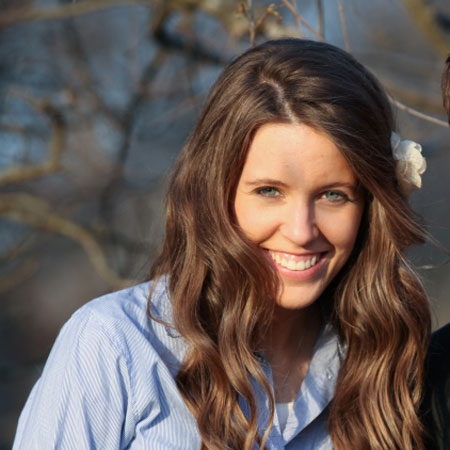 Widely recognized for her role on the TLC reality television series 19 Kids and Counting, Jill Michelle Dillard is a popular American reality television personality. She appeared in the series along with her parents and 18 siblings for around seven-year from (2008-15). After that, the reality star featured on the spin-off of 19 Kids and counting, Jill & Jessa: Counting On from 2015-17.

In addition to acting, Dillard also published a book under the title Growing Up Duggar with her sisters Jinger Vuolo and Jessa Duggar Seewald. She is also a Certified Professional Midwife.

Jill Michelle Dillard was born Jill Michelle Duggar on May 17, 1991, in Tontitown, Arkansas, United States. She was raised up in a joint Duggar family in her hometown Tontitown and it is where she completed her schooling.

Dillard is the second of nineteen children born to American real estate agent Jim Bob Dugger and Michelle Dugger. She is American as per nationality and is White by ethnicity.

Jill is a reality television personality who stared her acting career professionally in 2008 as part of the reality TV show 19 Kids and Counting. The show premiered on the cable channel TLC on September 29, 2008, and it features the Duggar family. She appeared in the show for around seven years from 2008-2015.

Following the series, Dillard went on to appear in the American reality TV show Jill & Jesse: Counting On. She appeared in the series from 2015 to 2017.

Books And Other Work

Dillard co-wrote a book Growing Up Duggar along with her sisters, Jessa Duggar Seewald and Jinger Vuolo. The book was published by a Christian publishing company Howard Books, on 4th March 2014. The book shows the life being a Duggar child and it also enunciates her parents religious perspective towards life.

On September 15, 2015, Dillard became a Certified Professional Midwife after numerous years of study and professional apprenticeship.

Jill Michelle Dillard is married to her longtime boyfriend, accountant Derick Dillard for around four years. The couple started dating in November 2013. They first met in Nepal through her father, Jim Bob Duggar, who was a prayer partner of  Derick during his mission trip to Nepal.

You know you’re a mom when...you walk 1hr. 10 min with both boys to get to a @chickfila We were enjoying some beautiful Colorado Springs weather while papa was busy with the rest of the team from church! #chickfilaplayground #longwalk #ThankTheLordWeDidntHaveToWalkBack

The pair later started talking through the telecommunication application software Skype.  In an interview with the People, she stated how they first met each other.

“I am so happy. Our story is so very unique. The first time we talked, he was in Japan, we met in Nepal, he spent time in India and Israel and then came back to Arkansas where he met my family. We have a very international story even though we live so close.”

During the last season of 19 Kids and Counting, on 29th March 2014, Derick proposed Dillard. The couple tied the knot on June 21, 2014. It was announced on August 20, 2014, that Jill was pregnant with their first child, a boy named Israel David Dillard. The pregnancy didn’t go as planned as she underwent emergency C-section in order to give birth.

The Dillard family relocated to Central America in 2015 to work as missionaries with S.O.S. Ministers. They came back to the United States after staying for ten months. The couple welcomed their second child, a son, Samuel Scott Dillard on July 8, 2017.

Dillard is also quite popular on social media like Instagram and Twitter, where she mostly posts photos of her newly born child and her other family members.

In June 2015, Dillard revealed on The Kelly File that her oldest brother Joshua Duggar used to molest her as a child. She said that her brother touched her inappropriately while she was asleep. She further added that she didn’t even know about her brother’s dirty deeds until he confessed to their parents.

Dillard shared with the host Megyn Kelly making the police report of the incident public was revictimization and the detail included in the report of her abuse might discourage other victims from seeking help.