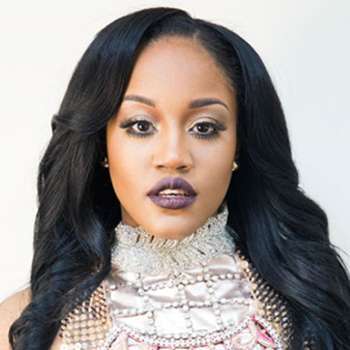 Nicknamed 'the twerk queen’, Jhonni Blaze established herself as a model with a hot temper and beautiful body. She is a multitalented person who can play piano, acoustic, bass guitar, violin, clarinet, and drums. She is also a singer and has released a number of singles. Besides, she has also worked in some music videos of global stars including Chris Brown and French Montana.

Early Life And Education Of Jhonni Blaze-When was She Born?

Jhonni Blaze was born on June 10, 1990, as Jzapal Jackson inNew York City, New York, USA. She has the star sign of Gemini that defines her personality to be sociable, talkative, and whimsical.

She has not revealed her parents' name, but in an interview, she revealed she is very close to her father and loves him a lot. She has mixed ethnical descent; belongs to the German and African-American heritage. She is American by nationality. She has 7 siblings.

Jhonni Blaze hasn't revealed anything about her educational background. As per some sources, she was not interested in education from her early childhood. Later when she turned 17, she tried to enter the Julliard Performing Arts School, however, she was rejected. Blaze started drinking while she was still in school and started working as a stripper to support her livelihood.

Blaze started working as a stripper at the age of 15 and soon she was able to attract a lot of customers due to her twerking skills.

In addition, she has also modeled and appeared on the covers of prestigious magazines like TMZ, King, XXL, iDYMES, Stunnaz, B.A.D.D, Hip Hop Weekly and Straight Stuntin. She has worked on the music videos for the singles of superstars like Chris Brown, French Montana, Young Berg, Jim Jones, and Jadakiss. She also tried her hand in acting by playing a role as Frank Chase in Streets of Harlem. Later, she also worked in Straight Stuntin Chronicles: Vol.3- The Man in the Mirror.

The multitalented star Jhonni Blaze started a career in stripping, modeling and went on to establish herself as a singer and actor. From her multi-dimensioned career, she has amassed a good net worth which is estimated to be around $100 thousand as of January 2019. She has not revealed the earnings from her stripper career but according to Payscale, the average exotic dancer earns around $47,471 per year.

Similarly, she also earns a decent amount of money from her singing career but she has chosen not to reveal the exact earnings to the media.

Blaze is currently single and is not married. She was in a relationship with Brian Washington for a long time and also planned their marriage, however, misfortune hit her hard! Her then-boyfriend Washington was shot dead on Christmas Day in 2013. She was shattered by his death after which she left the city and relocated to Atlanta after completing the formalities with the police.

In 2014, she reportedly started dating Rich Dollars, however, their relationship ended shortly after. Notably, she flung with Hip-Hop icon Drake. After some datings, Blaze also broke up with Drake. She also accused him of sending hitmen to kill her. According to the reports, Drake threatened her after she released the screenshots of their private conversation and spilled the beans on their unprotected intercourse in an interview. After she was threatened by Drake, she even went to the police which made headlines in 2018.

Later she dated the American singer and songwriter Robert Bobby Wilson. Their affair lasted only for 2 months before they broke up. After this, she started dating Fetty Wap. The couple was openly in a relationship, however, as her previous relationships, it didn't work for her too. After her breakup with Wap, she dated few more guys including comedian Micah Sierra Katt Williams and Steven Jordan before going to the single status.

Jhonni Blaze opens up about her past and her struggles in the following video.

Lately, she was in a relationship with a TV personality Bryshere Yazz Gray also known as Yazz the Greatest who plays Hakem Lyon in Empire.