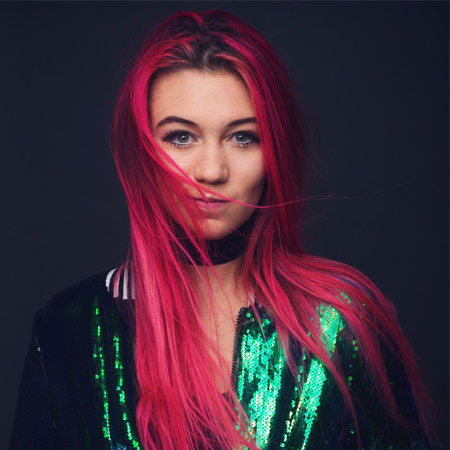 The American Social Media Personality and YouTube Star, Jessie Paege is a content creator of Lifestyle, fashion, music, food, and DIY videos who can be found on her self-titled channel. She also formerly called glam with Jessie.

Jessie was born on March 12, 1999, in New Jersey. She started her career at an early age. In her earlier age, her mother helped her constantly on her projects and sometimes appear on her videos. She was a shy girl in school.

Jessie has a brother named Matt. she belongs to American Nationality and her ethnicity is white.

She used to suffer from terrible social anxiety. Being a YouTube fan-girl, she learned that some famous You-Tuber was also very shy initially. YouTube help her come out of her comfort zone.

Jessie began her career in the YouTube channel when she was a freshman in high school. In that time she was just 14 years old. After high school, she joined a rock band as a lead guitarist.

Jessie has acted in many videos songs. Among them, some of the most hit videos are like: Draw My Life Challenge, The Little Mermaid, Clothing Haul lead her to become more popular on YouTube. She posts videos about fashion, lifestyle, rock music and innovative DIY projects.

Jessie has performed live in 24 cities alongside You Tubers Alyson Stoner, Niki & Gabi, and Alisha Marie as part of Fullscreen 6 weeks long Girl Night In tour in August 2016.

Jessie success on Youtube also landed her roles in TV series like Guidance and Awesomeness TV. In March 2016, she was featured in an issue of Nation-Alist Magazine.

Jessie Paege's Net worth And Earnings

Jessie has already gained name and fame at such a young age. From her career, she has also made a considerable amount of net worth which according to some sources is estimated to be around $0.5 million, in 2019.

Her major source of income is her YouTube Channel where she has over 1.55 million. She has also her own clothing line (merch). There most of her products range from $13-$30 a piece.

Jessie is not married yet but was once in a relationship with her ex-boyfriend Dayne Dyer. In July 2018, the media personality alter came out as a bisexual.

She is one of the hottest and young ladies. She has got pink strands on her hair ever since she was younger. There are many fans, especially males who want to make her as a life partner.

However, she is still unmarried because she is too young. And she hasn't revealed about her dating and boyfriend rumor anywhere.

So, it proves that Jessie is possibly single and has no any affairs/boyfriend.