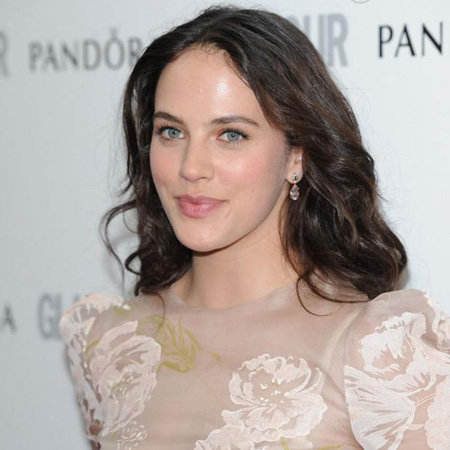 English actress, Jessica Rose Brown-Findlay is best known for her role Lady Sybil Branson on British historical period drama television series, Downton Abbey. She has also appeared in the period drama Harlots. She trained with the National Youth Ballet and the Associates of the Royal Ballet when she was younger.

She is the winner of Glamour Award for UK TV Actress, and Screen Actors Guild Award for Outstanding Performance by an Ensemble in a Drama Series.

Jessica Brown Findlay was born Jessica Rose Brown Findlay on 14th September 1989 in Cookham, Berkshire, England, United Kingdom, under the birth sign Virgo.
Jessica is the eldest of two children of a nurse mother, Beverly, and father Christopher Brown-Findlay was a banker as well as a financial advisor. Her sister Katy teaches is a handicapped child.
As a young girl, she attended the Furze Platt Senior School in Maidenhead. There, she discovered her interest in performing as well as dancing and thus started to train with the school’s drama team.
Apart from that, she also trained at the National Youth Ballet as well as Associates of the Royal Ballet. While she was 15, she was invited to the Royal Opera House in order to dance for an entire summer season.

After she completed her high school, she chose to undertake the A-levels course offered by the Arts Educational School, and her parents had approved her to make a future in Arts. But an unfortunate chain of events saw her undergo three major surgeries of her ankle, the last one that went wrong.

As a result, she could not dance for the rest of her life, which was a big blow to her future plans. Then she chose acting as an alternative, and as she had already performed during her childhood days, she joined the Arts Educational School in Tring Park, to enhance her acting skills, and complete training course.

She then decided to study Fine Arts and joined the Central Saint Martins College of Art and Design. Born and raised in England, Jessica is a British by nationality and a Christian by religion, who belongs to white ethnicity.

Jessica Brown Findlay started her acting career with a role in film Albatross, where she played the character of Emelia. Then she landed roles in TV shows like Misfits and Downton Abbey, and in the later one played as the young daughter of Grantham. With three successful seasons already, she decided to leave the show and move forward to try different things.

She got a role in the second episode of Black Mirror, which was produced by Channel 4. With her next role in John McKay’s Not Another Happy Ending, she was also chosen to be the face of Dominic Jones' Jewelry lines.

In the same year, she played the role of Alia Pelletier in the mini-series Labyrinth, based on a book by author Kate Mosse. 2012 was an important year for her, as the same year she was also chosen in the crew of the movie Winter’s Tale, which was released in 2014.

Jessica Brown Findlay has ama s sed a decent amount of money from her career, however, her net worth is not disclosed and it is still under review.

As per some online sources, we found she has an estimated net worth of $1 million.

As a result, she has got many friends and admirers, apart from the millions of fans worldwide. In 2010, Shwe had an affair with actor Thomas Campbell (2010-2012).The duo was doing great in the love life.Unfortunately, they separated their ways in 2012.

Not much is known about her personal life, and there have been no rumors about her dating life. She has been successful to conceal her affairs from the media but has confirmed that she has not been married till date.