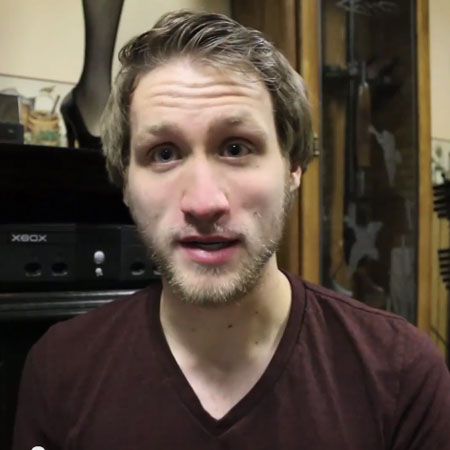 Born and raised in New Jersey, Jesse Ridgway is a famous YouTuber with more than 3.6 million+ subscribers on his YouTube Channel McJuggerNuggets. He began uploading videos since December 2006. He is known for his scripted "Psycho Series" where two brothers fight each other while dealing with their father famously known as "Psycho Dad". He gained huge popularity after releasing the video titled Psycho Dad Shreds Video Games. His other notable work includes Overachievers, The G.A.M.E., Rule 19, and C-R-I-S-I-S. Ridgway is also a director, producer, and actor.

Jesse Ridgway aka McJuggerNuggets was born on September 29, 1992, in New Jersey under the birth sign Libra. He is the son of Jeffrey Ridgway Sr. and Theresa Abraham. Regarding his nationality and ethnicity, he is a White American.

He spent most of his early childhood in New Jersey along with his brother, Jeffrey Jr., who is a co-creator of the Psycho Dad Shreds Video Games. Ridgway graduated from the Rowan University in 2014.

Jesse Ridgway started his YouTube career in December 2006. On 9th December 2009, he uploaded a video, Cops- The Untold Story on his YouTube channel, McJuggerNuggets. The video earned over 261k views.

Though Ridgway came to limelight for his short videos and skits, he gained widespread popularity after he started making his own miniseries. He produced, directed, and even acted in numerous miniseries, including, Overachievers, The G.A.M.E., and Rule 19.

Shortly after that, Ridgway went on to make another popular film series Psycho. He gained lots of popularity and appreciation for his performance. He then directed another popular miniseries C-R-I-S-I-S.

Ridgway grabbed huge attention after he began to create and direct the Psycho Series where he played the protagonist. The series is about an unemployed YouTube gamer, Jesse who was restlessly harassed by his insane father. The character’s dysfunctional parents were loved by millions of fans.

In December 2012, Ridgway uploaded a video as a joke but his fans loved it. So, he then flushed out some characters and made the ultimate series. His fans were so sure that the series was real so, around 1000 times 911 calls were made when he pretended to murder his father in the series.

CAPTION: Jesse with the casts of Psycho Series. SOURCE: Go90

Jesse Ridgway has an estimated net worth of around $1 million, according to the sources. His main source of income is his YouTube channel from which he earns an average of $39.7K-$635.1K yearly.

He is also involved in charity, every six months, he gives away $500 to the organization which cares for children from an abusive household.

Jesse Ridgway is in a relationship with American singer-songwriter Juliette Reilly. The couple started dating in September 2013 and also made a number of videos together.

Though there were rumors of couple's break up, they are still together and living happily.

In 2014, during filming the video, Nugget suffered a major brain injury. He was then hospitalized for weeks.

Here is the video where Ridgway talked about the document series, ''Psyco Family":