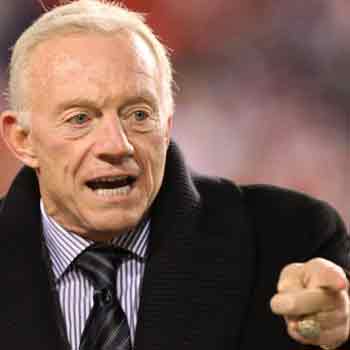 Jerry Wayne Jones Sr. known as Jerry Jones is the name of an American billionaire businessman. He is the owner, president, and general manager of the NFL’s Dallas Cowboys. He is one of the few NFL owners who has earned a significant level of success. He has been featured in several of the films and also in adverts.

Jerry Jones is the son of J.W. “Pat” Jones and Arminta Jones.  He was born in the year 1942, October 13 in Los Angeles, California, USA. He has attended North Little Rock High School and the University of Arkansas. He was a co-captain and starting guard of 1964 Arkansas football team.

He is the only man in the history of the National Football League who played for the collegiate national championship football team and won the Super Bowl Cup. Jones received his Master’s degree in business in 1970. After being unsuccessful in business ventures, he began an oil and gas exploration business in Arkansas. He is a dedicated businessman and family man.

Jerry Jones was the inspiration for the character Baxter Cain in the 1998 movie Basketball. He had appeared in the1998 made-for-television reunion movie Dallas: War of the Ewings. He had also appeared in a 1996 episode of a TV Show Coach and in 2007 commercial for Diet Pepsi.

He also appeared in the seventh season of an HBO series called Entourage in 2010, in an episode of TNT incarnation of Dallas “Truth and Consequences”, in a series of commercials for 2012 season ESPN’s Monday Night Football.

He has also narrated a doc u mentary on his former teammate and business partner Jim Lindsey and also in 2013 Pepsi commercial. Thus, besides being a successful businessman, he is also an actor and a popular media face.

Jerry Jones had purchased the Cowboys from H.R “Bum Bright” in the year 1989 paying $140 million. The Cowboys won the SuperBowl in the 1992 and 1993 seasons. The team began to win its tournaments the following years making the fame and name of Cowboys.

Jerry Jones is one of the two NFL owners who have the power or title of general manager. Even though the team had a good start winning several of the tournaments initially, the team began to suffer from the loses. Some of the Dallas Cowboy fans are not happy with them and have expressed their unhappiness with Jones for the team’s performance.

The richest businessman Jerry Jones has the net worth of $ 3.1 billion. Jerry owns a house in Texas which is listed in the top 100 expensive celebrity houses in the world. It worth’s $ 17,233,170. One can read his biography indifferent of the internet sites including Wikipedia and others. There is also the availability of his pictures on the web.

Talking more on Jerry Jones, he is 76 years of age and is a married man. He is married to Eugenia “Gene” Jones. The couple is blessed with the three children, Stephen, Charlotte, and Jerry. His first child Stephen was born in 1964 and serves as the Cowboys chief operating officer/ executive vice president/ director of player personnel.