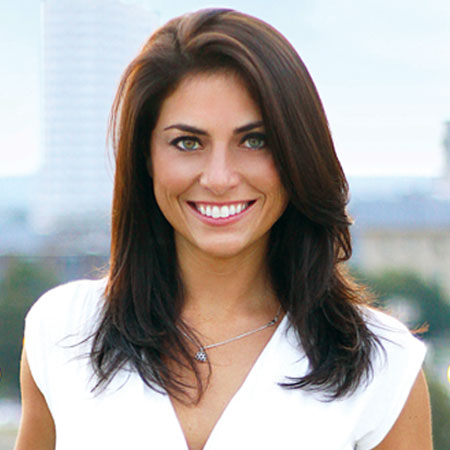 Jennifer "Jenny" Dell is a very beautiful and talented reporter, widely known as a sideline reporter for the NFL on CBS. She started her career as a reporter for NESN covering Boston Red Sox baseball. She is also known as the wife of  Will Middlebrooks( who is an American professional baseball player).

Dell was born on 26 July 1986 in Connecticut, United States. She is American by nationality and belongs to the White American ethnic background.

She grew up in Southbury, Connecticut watching the New York team. She became a truly pa s sionate and loyal fan of sports and her love for the Red Sox started.

Dell attended the University of Ma s sachusetts in Amherst, Ma s sachusetts. She graduated from the university with a degree in hospitality and tourism management. She started following the Red Sox during the fresh year, as she was a great fan of the team.

During her second year in college, she became a student amba s sador, head of a Career Day committee and a member of the All-Girl Cheerleading Squad. She also worked for the UMa s s Athletic Department, where she coordinated and hosted various athletic events for the student body, alumni, and donors.

Dell got the opportunity to audition for an on-air position with ESPN Digital Media after working at ESPN for six months. She worked on several projects for ESPN such as Countdown Daily, filming weekly AccuScore and IBM-sponsored segments for the NFL season.

Dell has covered Super Bowl XLIV and XLV and hosted various red carpet events interviewing many athletes and celebrities. Her experience and dedication towards the work have led her to her dream job at NESN.

Dell was removed from the job after publicly announcing that she was dating third baseman, Will Middlebrooks. She had worked at NESN for two years.

She currently works as a sideline reporter for the NFL on CBS where she was also supported by Jamie Erdahl. She has been a hardworking and dedicated person in her career.

How Much Is Jenny Dell Net Worth?

Dell currently works for CBS as a reporter. She receives a good amount of salary from the station. Though her net worth and salary is yet to be disclosed, her husband, Will's net worth is estimated to be $700 thousand.

Married To Will Middlebrooks

Dell, age 33, is a married woman. She tied the knot with her boyfriend, Will Middlebrooks on the day of Valentine (i. e 14 February 2016) just after the year of their engagement. She first met Will when she was working for the Boston Red Sox.

She was engaged to Will after a few months of meeting and was finally married after having an affair for several years. Former New England Patriots quarterback Ryan Mallet even attended their wedding ceremony.

Dell is active on Twitter and Instagram and has a huge number of fan following on both of the accounts. Her salary is counted over millions and has maintained an impressive net worth in her life.