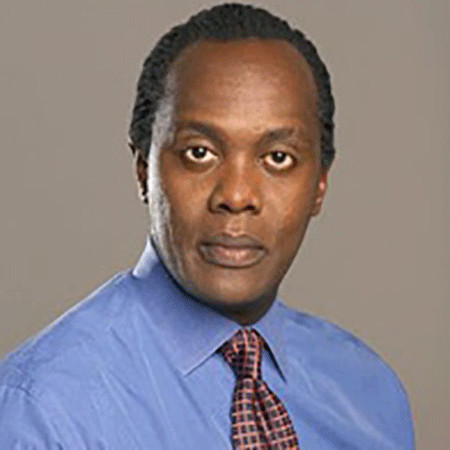 Born on January 7th, 1966 in Kiambaa Village in Kenya, Jeff Koinange is the son of Frederick Koinange. His mother was a headmistress and a strict disciplinarian. He has three siblings, Hilda Wanjiru, Phyllis Wangui and Freddie Koinange. Jeff is the youngest in his family. His father died of a brain hemorrhage just after two months of his birth.

It was difficult for a single mother to raise four children by herself but looking at the popularity and success of her son, she must have been proud. Jeff received a good education. He went to Hospital Hill School later changing to St. Mary’s where he did his A-levels.

Jeff studied Broadcast Technology and Management at Kingsborough Community College in Brooklyn, New York.  After being a topper of his class, Jeff Koinange got a scholarship to study at New York University where he completed his BA in Broadcast Journalism in the year 1991.

Jeff belongs to Kenyan nationality and regarding his ethnicity, he is mixed.

After completing the High School in St. Mary’s, Jeff Koinange was recruited as a flight attendant for Pan Am World Airways in 1986. He spent a year and a half, flying with the Pan Am Airways. During the time, he discovered his talent for communication. The passengers used to applaud his announcements on the plane saying Jeff has a good voice.

Jeff is regarded as a great negotiator and a skilled motivator. He is a gifted anchor. He is the first African in the history to win prestigious Emmy Award, Peabody Award, Vernon Jarrett and the Prix Bayeux.

Afterward, Jeff became interested in journalism and therefore studied Broadcast Journalism. In 1995, Jeff became a part-time news anchor at KTN. He was appointed as Reuters West Africa Chief in 1998 based in Ivory Coast relocating to J’burg. Jeff Koinange served in CNN since 2001-2007 as a senior African correspondent.

Jeff Koinange's Net Worth, Salary, And Major Source of Income

The media personality owns a house in Nairobi, Kenya. But the worth of the house is yet to be revealed.

Looking at the popularity and position of Jeff Koinange, it can be believed, Jeff earns a very handsome salary and has a very good net worth. It can be believed Jeff is one of the richest men in Kenya.

Moving onto the personal life of Jeff Koinange, he has been married twice. Jeff was previously married to Sonya. They got married in 1988 and parted ways in 1994 after Jeff caught her red-handed with another man in the bed.

Later, Jeff Koinange fell in love with Shaila Koinange, whom he met in the interview to be flight attendants in the year 1986. The two got married in 1998 after Jeff divorced with Sonya, his first wife.

The couple struggled to conceive for 9 years and with the treatment, they welcomed their first child Jamal Mbiyu in 2007. The couple is living very happily together with their cute little son.

The media personality along with their family currently resides in Nairobi, Kenya.

In 2007, Jeff got caught in a sex scandal which is followed by his move from CNN. It was claimed by Marianne Briner, a Swiss citizen, that she and Jeff were involved in an affair.  The same year, prior to this event, Jeff Koinange was in controversy to have staged a report on the movement for the emancipation of Niger Delta.