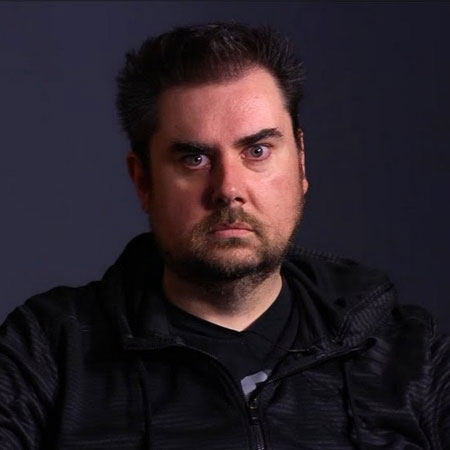 Jeff Gerstmann, 42 is an American video game journalist. He is popularly known for being the co-founder of the website Giant Bomb. He is a former editorial director of the gaming website, GameSpot. He was named one of the top 25 biggest celebrities in the gaming industry by Complex magazine.

Jeff Gerstmann was born Jeffrey Michael Gerstmann on August 1, 1975, in Los Angeles, California. He is American and belongs to the White ethnicity. His birth sign is Leo.

Gerstmann started his career in video game journalism since the age of 17. He did freelance work, and also served in a print magazine for a year. In 1996, he was hired as an intern for GameSpot and eventually became an editorial director for the website.

Gerstmann appeared in one of the segments of Good Morning America. He talked about the release of the Sega Dreamcast, playing NFL 2K, and Ready 2 Rumble Boxing in the show in 1999.

In 2007, Gerstmann was fired from GameSpot. However, the company didn't reveal the reason for his termination.

In March 2012, Gerstmann was finally allowed to reveal publicly about his termination.

According to him, the reason for his termination was low review score, which he had given to Kane & Lynch.

Gerstmann also appeared as a regular guest at the show named Bonus Round. The show is based on panel topic discussion about game industry presented by Geoff Keighley on GameTrailers.

Besides journalism, Gerstmann is involved in music as well. In 1995, he formed a rap duo, Headboard with Glenn Rubenstein. Later, he formed another band, Suburban All-Stars, which was ended up being fairly short-lived.

Gerstmann wasn't ready to give up his musical career. In 2003, he formed another duo, Midnight Brown with his roommate, Chris Henderson. They released four albums until 2010. The band later decided to release songs individually.

Gerstmann stands the height of 1.9 meters (6 feet 3 inches). He is one of the successful video game journalists who are active in the game industry since the 1990s.

Gerstmann has maintained the net worth close to millions. The company, Giant Bomb where he worked has an impressive value of $76 million. He also served in the GameSpot as Editorial director. He earned millions of dollars serving the company.

Jeff Gerstmann is a married man but has no children yet. He tied the knot with his longtime girlfriend on February 16, 2016. He hasn't revealed the name and the personal details about his wife.

The duo got engaged in the summer of 2015. They announced their marriage in February 2016 on GiantBomb's podcast. He is also active in philanthropic work.