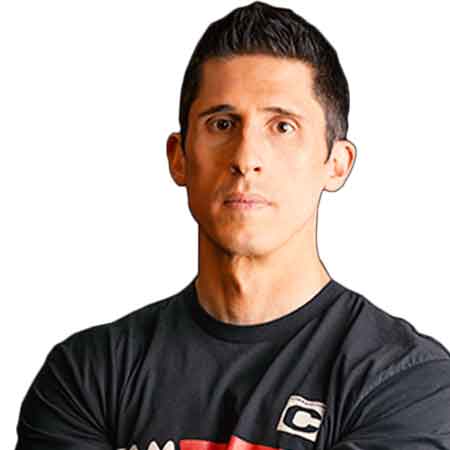 Social media star and fitness freak, Jeff Cavaliere is known as the founder of ATHLEAN-X. He served as the head physical therapist and a s sistant strength coach for the New York Mets from 2006 to 2009. He also worked as the a s sistant strength coach of the team and had the privilege of being the personal trainer of the team’s star player David Wright. Cavaliere is a strength and conditioning specialist, certified by the National Strength and Conditioning Association (NSCA).

Jeff Cavaliere was born on June 28, 1975, in Connecticut, the USA under the birth sign of Cancer. He belongs to American nationality and as far as his ethnicity is concerned, he is a White.

Cavaliere found his pa s sion for Fitness in his childhood when he saw bodybuilder and action star, Arnold Schwarzenegger, who had a shredded physique. During his high school, Cavaliere joined a gym and started to lift weight to make a body just like his idol. He also played baseball and soccer.

While in the university, Cavaliere was a huge fan of The New York Mets and never missed a single game. That was the reason why he became a physical therapist. Once in an interview, he said:

“I grew up an avid Mets fan. I lived and breathed the team and watched every inning of every game all the way through college.”

Jeff Cavaliere began his career as a physical therapist and personal trainer. In 2001, he worked with popular baseball player Mark Johnson. He continued training Johnson and other elite athletes for the next few years.

Moreover, Cavaliere became a contributing writer to Men's Fitness in 2004. He has authored the Major League Insider Training Manual and the Teen Sports Nutrition Blueprint.

The baseball star impressed by Cavaliere’s work informed Cavaliere of an opening at the club after the head physical therapist had transferred to another baseball club.

Cavaliere got full support of Johnson to work as a physical therapist at the New York Mets from 2006 to 2009. During the time, he also worked as the a s sistant strength coach of the team. Under his physical training, the baseball team won the 2006 National League East Championship.

Cavaliere then founded the ATHLEAN-X Training System. He started posting videos that he had created in 2006, on his ‘YouTube’ channel.

In 2009, Cavaliere resigned from the baseball club. After that, he authored numerous workout books and developed a training system that soon became one of the most popular online fitness guides.

As of 2019, Jeff Cavaliere has an estimated net worth of $2 million. He is one of the most sought-after lecturers in the field of strength and conditioning training.

Cavaliere soon became a world-renowned trainer and social media star, with millions of subscribers on his YouTube channel. He also became popular on other social media platforms such as Twitter and Instagram.

Sources report that the YouTuber owns a house in Connecticut.

Jeff Cavaliere is a married man. He has managed to keep all the information about his wife, with whom he has been together since 2008 away from the limelight. The couple is often seen together in public and has appeared in a number of his videos.

In 2016, the couple welcomed their twins, and the kids also appeared in some of his videos as well and their pictures are shared by him on social media.

"Happy Fathers Day" doesn't always mean happy sons! After all, if mom's taking the picture she can't be holding them (their favorite place to be!). That's ok. I hear the balance of parental power shifts as they get older. I mean, let's face it, when it comes time to learn proper application of muscle markers and the finer points of spider curls...they'll know where their bread is buttered . In all seriousness, I've worn many hats in my life but NONE have been more rewarding than being a dad to these two little men. I pray every day to be someone they look up to and emulate as an example of rock solid principles. My father did that for me and I am determined to do the same for them. Now, regarding the principle of "sharing", can you give Jax back his book Xavier?!? We've got a picture to take! #happyfathersday #dad #rocksolidprinciples #leadbyexample #smileforthecamera #wheresmom #spidercurlsforthewin #someday #jeffcavaliere #athleanx #teamathlean

He currently lives in Connecticut with his spouse and two kids.

Below, we present the video of Jeff Cavaliere