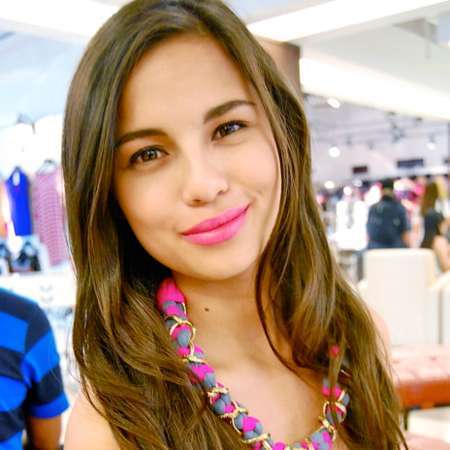 Jasmine Curtis Smith is an actress, dancer, writer and endorser and a TV Host of Filipino- American nationality who is the younger sister of artist Anne Curtis. She is known best for her several acting roles and hosting credits. She was born as Jasmine Casandra Ojales Curtis Smith on April 6, 1994 in Melbourne, Australia to parents, mother Cermencita Ojales and father James Ernest Curtis Smith.

Jasmine grew up with two siblings and moved to Philippines with her family. She finished her schooling of the secondary level there from the St. Paul College situated in Pasig. She completed her high school from the Loyola College situated in Watsonia, Melbourne. She is currently studying AB communication at the Atneo de Manila University.

Jasmine rose to fame first after she visited her sister Anne during her vacations. This led her to be pushed into the spotlight. She later appeared in the ABS-CBN’s noontime variety show Showtime. After this, networks began starting to sign her up. Curtis signed a three year contract with TV5 on December 20, 2011 and was groomed by the network as a Primetime Princess. She signed another contract with TV5 on 2013 and was happy with the decision of the network to allow both her studies and career to move along together. She appeared in the miniseries of the TV5 entitled Ang Utol Kong Hoodium. She played the role of Epifania Dionisio in Nanfito Ako next in 2012. She also starred in films like Puti as Nika and as Yael in Transit. She has also been starred in the cover of several magazines like Candy, Mega, and Hola etc. She also currently acts in a series called Jasmine as of now.

As far as her personal life is concerned, it too is covered widely by the internet tabloids like her career is. She was rumored to be dating Arron Villafor on 2010. Later, she was rumored to be in a relationship with Sam Concepcion on 2013. The rumor turned out to be true and they were having an affair. The affair however lasted only for a year until 2013. After their split, she has been reported to be dating Daniel Padilla as of now.  The rumors however have not been confirmed yet. Apart from this, she has not been rumored to be dating anyone and certainly seems to be focusing more on balancing both her career and her studies. She has supposedly no boyfriend now and doesn’t seem to plan on having one soon.

Jasmine’s net worth must be in the range of millions but the actual amount has not been revealed yet. Neither is the fact about her salary known to her fans. She has a height of 5 feet and 3 inches and an incredible body with a beautiful face which suits her and appeals to her fans around the world. Her bio is thus searched by fans around the world.