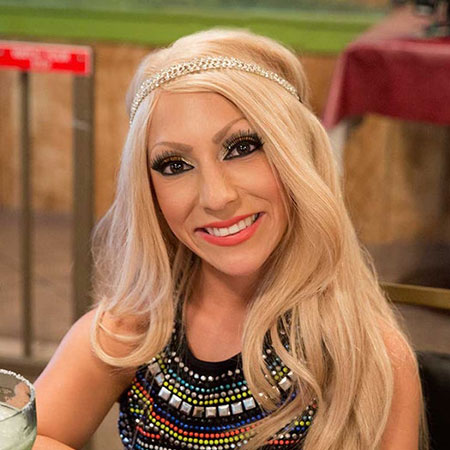 Jasmine Sorge is an American reality TV star, singer and hairstylist who made name for herself as a star when she appeared on the show Little Women: LA. The California native wanted to be a part of the beauty industry as she grew up and later became a hair stylist, however, her real aim was to become a singer and she tried to pursue a singing career on the Idol franchise.

Jasmine Sorge was born on December 19, 1984, in California, USA. She is a Sagittarius and her personality is defined as smart, caring, deep, honest and wild which are all traits of her zodiac sign.  She prefers not to reveal the name of her parents and siblings to the public.

Jasmine Sorge belongs to the White ethnicity and is an American by nationality. Sorge has been mum about her educational background.

Sorge is a reality TV star on the show Little Women: LA but before this, she was a hairstylist and worked in parlors. She was always interested in the beauty industry and where she stepped as a hairstylist.

Her TV career started back in 2015 when she was picked up for the reality TV show Little Women: LA. The show is about a group of 5 short women. Sorge is also a short woman who stands at a height of 4 feet or 121 cms only.

The video presented below shows Jasmine Sorge and her co-star in an interview with the Little Women: LA.

She also went to the audition of the American singing reality show American Idol back in 2005 where she reached the final list of the top 100 contestants.

The reality TV celeb is well-known among the fans of the  TV shows. From her career both as a hairstylist, singer and a TV star, she ama s sed a net worth of $200,000. She keeps the information about her earnings from her career secret from the media.

According to the sources, the reality TV stars make anywhere from $30,000 to $10 million per annum. According to TV guide, the cast of the Little Women L.A. earns around $2,000 per episode. Likewise, the basic salary for a hairstylist starts from around $24,682 and can reach up to $36,500.

Discover: American Reality TV Star Dave Kindig's Earning From His Profession?? Details Of His Net Worth And Income Sources

Sorge is a happily married woman with kids. It is not revealed when the couple got married. She is married to her husband Chris. The couple is blessed with two kids Mason Sorge born in 2014 and Michael Sorge born on December 1, 2016.

Apart from this, there is no information about any affairs and past relationships of Jasmine in the tabloids. She is also reluctant to disclose all the details of her dating and love life to her fans as well as the media.

You May Also Like: "Little Women: Dallas" Star Emily Fernandez Reveals She Is Expecting A Baby 2 Years After She Lost Her Son