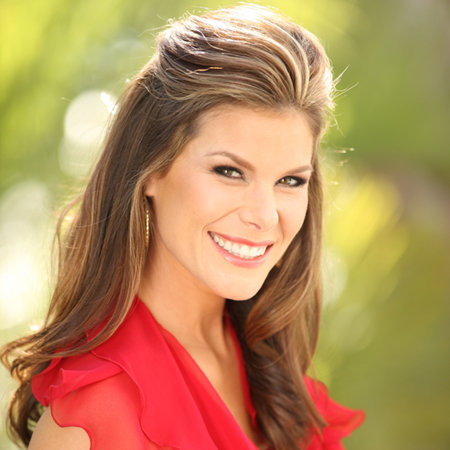 Jamie Little is an American pit reporter for NASCAR coverage on Fox. She is a former sports commentator at ESPN/ABC coverage of the Indy Racing League. She joined ESPN in 1998 and covered both the Winter and Summer X Games. She is well known among the motocross and extreme sports community and won the 2008 Toyota Pro/Celebrity Race, edging out Craftsman Truck Series champion Mike Skinner by 0.324 seconds.  She has been working for Fox Sports since 2015. It was announced on September 25, 2014, that Little would move to Fox Sports starting in January 2015 to work as a NASCAR pit reporter for Monster Energy Cup Series, Xfinity Series and Camping World Truck Series races.

Jamie Little is an American reporter/ journalist who was born on the 9th of April, 1978 and this currently 36 years of age. She was born as the second out of four children to Debby; an interior decorator and Thomas Little, who was a chef on a cruise ship.

Little has one elder sister and two younger brothers, and all grew up together at their house in South Lake Tahoe, California. From early childhood, Jamie had a deep interest in athletics and studied at the Green Valley High School. She was a team member of her school’s lacrosse team and besides that, she also played basketball and wrestled.

In an interview with the Sports Illustrator, she said, “I was often called a tomboy because I’d do things that no other girl in my cla s s would want to get into. But I didn’t think much of it back then.”

After completing her high school, she applied at the San Diego State University and received a scholarship for her prolific sports career. Wanting to study sports and professionalism, she undertook the course but later changed her major into sports journalism. An American by nationality, she is a Christian by religion and belongs to White Ethnicity.

Jamie started her professional journalism career with ABC in 1996, when she was given the post of a field reporter after completing her internship there. Then she worked for some time as a one-man band; camera, reporting and broadcasting before she was promoted to news anchor.

But then not even a year had pa s sed when she resigned from ABC and started working for ESPN as a sideline reporter from 1998. She was almost featured in all major sports tournament including the Indy Racing League inside the USA and later went international to cover Canadian hockey and football.

Her major coverage includes the Indianapolis 500 as well as the Firestone 550, and NASCAR on ESPN, especially between 2007 and 2008.

She also established her image as a pit reporter for extreme sports after she had covered events like X-Games and Motor Sports; which was featured on her show Moto World. She even participated in the Toyota Pro/Celebrity Race in 2008 and won the event beating the reigning champion Mike Skinner by 0.32 seconds.

After taking a break from her broadcasting career for a short time, she came out again in 2010 and announced her return to that year’s Winter X-Games on her website. She then went on to cover the second annual broadcast of the show New Years, No Limits.

In September 2014, she announced her move to FOX Sports Channel where she worked as a NASCAR pit reporter and covered some big events like Xfinity Series as well as Sprint Cup Series.

Jamie Little's Net Worth And Salary

Jamie Little's net worth is $500 thousand at present. She earns a decent amount of salary from her career. She has worked as a pit reporter on ESPN and ABC's coverage of the Indy Racing League and has covered the Winter and Summer X Games.

She has won the 2008 Toyota Pro/Celebrity Race, edging out Craftsman Truck Series champion Mike Skinner by 0.324 seconds. In the year 2013, Little authored a book called Essential Car Care for Women which is priced $18.20 for Kindle and $16 for Paperback on Amazon.

Jamie was also a cast in the movie Supercross which became the super-duper flop at the box office. The movie starred Steve Howey, Mike Vogel, and Sophia Bush.

Jamie Little is a married woman and has two children. She married Cody Selman in December 2010, in La Jolla, California.

The couple welcomed their first child, a son named Carter Wayne Selman on August 9, 2012. She gave birth to their second child, a daughter named Sierra Lynn Selman, on October 24, 2016.

Besides, this beautiful and talented TV personality has been in many relationships in the past. She has been linked with actors like Adam Hunch, Matt Damon, and Hugh Gunman. But none of the relationships were confirmed to date.

Recently, she has been spotted on a couple of occasions with director Patrick Zimmerman, although no confirmation about their relationships has been made.

Jamie Little currently resides in Las Vegas with her husband and children. She and her husband own two Jimmy John's franchises near Las Vegas home.