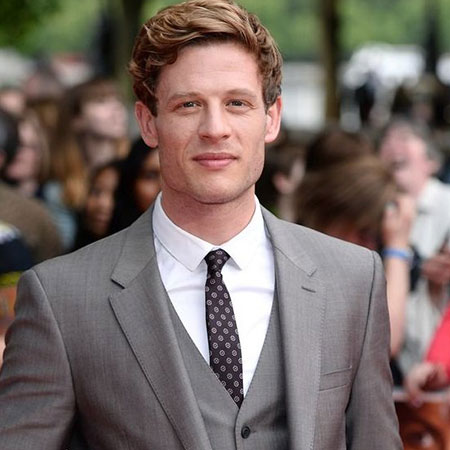 James Norton is an English actor who is famous for playing a role in British TV series Happy Valley, Grantchester, War & Peace and McMafia. Norton was nominated for the British Academy Television Award for Best Supporting Actor in 2015. Besides acting, he has also appeared in "Dragon Age: Inquisition" game where he voiced Cole.

James Norton was born on July 18, 1985, in London, England under the zodiac sign cancer. His father's name is Hug B Norton and mother's name is Lavinia J Norton. His father and mother both were teachers; his father was a lecturer at Hull School of Art and Design. He grew up in Malton in the Ryedale district of North Yorkshire. James has a younger sister named Jessica Norton who is a doctor.

Norton studied in Ampleforth College in North Yorkshire. Later, he enrolled at the Fitzwilliam College, affiliated to the University of Cambridge where he studied theology and performed in student theater. He graduated from there in 2007. He even got an opportunity to fly to Northern India to teach and perform for school children at 16 schools.

Norton also attended the Royal Academy of Dramatic Art (RADA) in London where he studied for 3 years and dropped out 6 months before graduation in order to take an acting role in 2010.

James started his career in 2009 with a short movie Kapital. After appearing in a short movie, he was cast member of Posh at the Royal Court Theatre in 2010. Norton began his theatrical career three years before he worked in a short movie where he played in a drama titled Cymbeline.

Afterward, he worked as Captain Stanhope in the cla s sic First World War drama Journey's End in 2011. Norton also played a role of Geoffrey in The Lion in Winter at the Theatre Royal, Haymarket.

In 2012, Norton played as James Blackstone in an episode (Gently with Cla s s) of Inspector George Gently.

In 2013, James appeared in Rush as a Formula One Driver Guy Edwards. The same year, he also appeared in television series like Doctor Who, Blanding, By Any Means and Death Comes to Pemberley (TV Mini-series).

Norton was publicly praised for his role of Tommy Lee Royce who is a villain of the famous crime drama Happy Valley. When the first series of this drama came out, James told that "8 million people are currently wishing me dead"

Not only in the TV series and Moves he has acted but also in the video game called Dragon Age: Inquisition- Trespa s ser he did a voice acting.

In 2017, James appeared in the TV series McMafia and he will continue to appear in FlatLiners and Hampstead.

James has done his acting on various Television Series and Movies which made him earn many awards.

As a successful actor, he has earned some decent amount of money by playing roles in a Movie and Television Series. He is still playing in movies and TV series which will help his net worth to grow. As of 2018, James Norton has an impressive net worth of around  $6 million.

James owns an Audi car which he has shared the image of the car and him in his Instagram.

James lives with his family in a Peckham district which he bought two years ago.

Norton has been a part of several Box Office Hit Movies some of them are:

Talking about James Norton's personal life and relationship status, he is not married yet. As of December 2018, Norton is dating an English actress Imogen Poots. In December 2017, the Mail Online revealed Norton was dating his new co-start Poots which they were found kissing during a Christmas shopping trip in London.

James and Poots met each other when they were filming the play Belleville at London's Donmar Warehouse.

According to some online sources, Norton dated a British actress Jessie Buckley which he met on the sets of the hit BBC show War & Peace.

At the Crime Thriller Award ceremony, James told that he as a type 1 diabetes. James is seen in social media like Instagram where he as got 81.1k followers and got 68.6k followers in his Twitter in 2018.