Jake Johnson is an American actor and comedian who is very famous for his portrayal in the Fox sitcom New Girl (2011–18) as Nick Miller and in the animated film Spider-Man: Into the Spider-Verse as the older Peter B. Parker/Spider-Man.

Jake Johnson was born as Mark Jake Johnson Weinberger on May 28, 1978, in Evanston, Illinois, U.S. He is the son of Eve Johnson and Ken Weinberger. He is of Amerian nationality and belongs to mixed ethnicity as his father is from the Ashke - Jewish family and his mother's ancestry is Irish, Polish Catholic, and English.

When he was at the age of two, his parents divorced and he started living with his mother and his older siblings, brother Dan and sister Rachel. Later on, at the age of 17, his father resurfaced and as of now, they have developed a strong relationship.

Talking about his education, he went to New Trier High School in Winnetka and later on joined the University of Lowa.

The 42 years old, Jake Johnson is a married man. He shared the wedding vows to an artist named Erin Payne in 2006, however, the detail of their marriage and love life is missing. Together they have shared twin daughters. 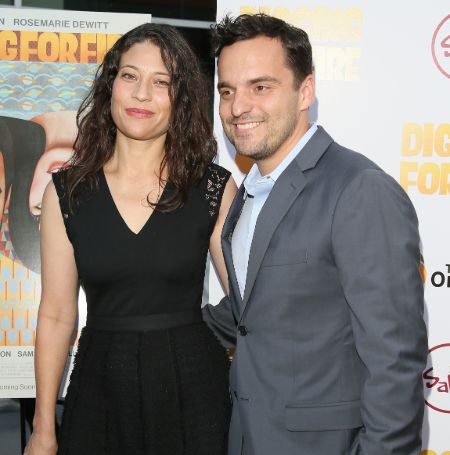 Well, Jake is one of those who prefer to keep his personal life away from the public and the news of him being married came as a surprise to all of his fans and followers.

He is an active user of the Instagram platform where he has 1.3 million followers but most of his posts are related to his professional life.

The famous actor and comedian, Jake have a net worth of $8 million as of 2022 from his career in entertainment since 2006. To this date, he has worked in several movies and series and has more than 65 acting credits in his name.

He made his acting debut with his appearance in the short video named The Great Sketch Experiment as Janitor and Best Men as Danny. Following his two short video appearances, he was cast in the movie named Bunny Whipped as a Basketball Player in 2007.

After this, he appeared in several movies and TV series and some of his notable works include Your Magic Touched Me, Curb Your Enthusiasm, Redbelt, Funny or Die Presents..., Ceremony, A Very Harold & Kumar 3D Christmas.

As of now, he is busy filming his upcoming movie Jura s sic World 3 where he will appear as Lowery Cruthers.