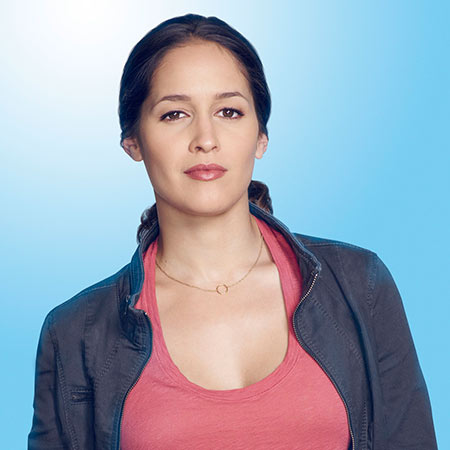 Her other TV roles include Scream Queen, The Shop, The After, and Shooter. She has appeared in the movies such as High Voltage, Misfire, Laid Out, and Girls Trip.

Jaina Lee Ortiz was born on Fort Ord military base in California and was raised in The Bronx, New York. Her father Joe Ortiz was a homicide detective by profession.

Her parents divorced when she was 7-years-old and she was raised by her mother, Daisey Acevedo. The only child of first-generation Puerto Rican parents, she spent her childhood learning Salsa at a dance studio.

Jaina Lee Ortiz started her dancing training when she was nine. She took Salsa and Mambo classes. She was able to train other dancers when she reached the age of 15. Along with dancing, she began her acting career by appearing in student films.

In 2009, Jaina Lee Ortiz auditioned and was cast on the second season of VH1’s popular reality show ‘Scream Queens’. On the season finale, she was named the first runner-up. In 2013, Ortiz grabbed the role as a series regular in ‘The After’, which was produced by ‘The X-Files’ creator, Chris Carter. The show received positive feedback from the fans and her performance was also appreciated by the fans.

Jaina Lee Ortiz's net worth is $300 thousand at present. She earns a huge amount of salary from her acting career. She was nominated for Imagen Award for Best Actress - Television for her portrayal as Detective Annalise Villa in the American police procedural drama series, Rosewood.

The current relationship status of Ortiz is a mystery to the world as there is no news of her having a relationship with anyone. Currently, she is busy working on her popular show ‘Rosewood’ which perhaps may be the reason for her being single. As of now, it looks like she does not have any intention to get married and have a husband.