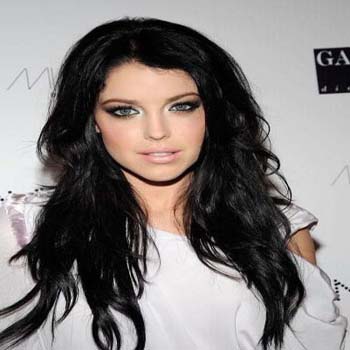 Jadyn Douglas previously known as Jadyn Maria is a Puerto-Rican singer-songwriter and actress. She is famous for her singles like Good Girls Like Bad Boys and Trenchcoat & Shades.

Joy Lynn Strand Pas, better known by her stage name Jadyn Maria, was born on April 20, 1985, is a Puerto Rican singer-songwriter who grew up in Nashville, Tennessee.

She was the oldest daughter born to Rosa and Dan, Southern Baptist pastor. Her mother is Puerto Rican. Her family's Christian background meant that she was immersed in Christian music and she began singing in church at the age of two.

At the age of seventeen, Maria was signed to Sparrow Records, a Christian music supplementary of EMI, after being spotted singing at a wedding. She later appeared on the debut album by former Christian band Avalon member Jody McBrayer. She was also asked to record a cover of "With or Without You" with hip-hop group GRITS on the U2 tribute album In the Name of Love: Artists United for Africa.

In 2006, Maria took part in the failed reality talent show The One: Making a Music Star. Maria signed a song writing deal with Universal Music Publishing Group in 2007 and eventually auditioned and signed on as the first artist on Ne-Yo's Compound Entertainment label in 2008.

After being spotted by an ad agency, Maria and one of her songs, "Rock You Senseless" were featured in Clairol's 2004 Herbal Essence campaign. She also appeared on What I Like About You as part of the campaign. She later signed with Virgin Records with plans to release a non-Christian album that failed to come to fruition.

A subsequent contract with Zomba Label Group also fell through. Maria later appeared as a contestant in the failed reality television series The One: Making a Music Star in 2006 where she was the first contestant to be eliminated.

In 2007, Maria signed a song writing deal with Universal Music Publishing Group, which led to her meeting with R&B musician Ne-Yo's manager and then Ne-Yo himself, eventually signing with his label and Universal MO town after auditioning for its president in 2008.

She was the first artist signed to Ne-Yo's label, Compound Entertainment and was an opening act for his tour. Maria appeared in her friend, pop singer Katy Perry's music video for "Hot n Cold" as a bridesmaid. She also co-wrote the title bonus track from Ashley Tisdale's album Guilty Pleasure.

The single, "Good Girls Like Bad Boys" was released in 2009 and featured rapper Flo Rida. Another single, "Trench coat and Shades" was released digitally in the UK. One of her songs "Catwalk V-O-G-U-E" was featured on an episode of the reality series The Hills and later covered by German girl group Monroe.

Universal MO town was later shut down and she is not on the resulting Universal Republic Records or MO town Records. She has also been removed from the Compound Entertainment artist roster on their website.