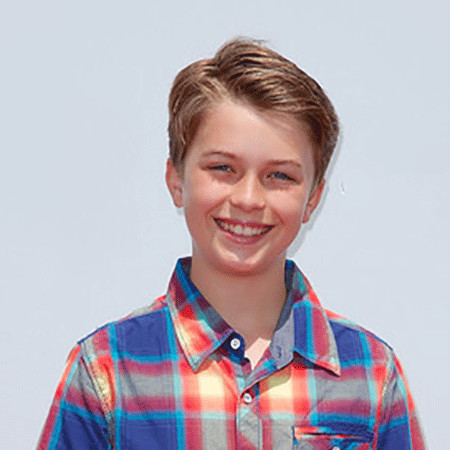 Jacob Turner Hopkins, an American child actor born March 4, 2002 in San Francisco, California is an amazingly talented actor who is best known for working in some famous movies like True Blood as Alexander Drew and also known for being the voice of Gumball, after replacing Logan Grove, in the famous cartoon series The Amazing World of Gumball  infamous cartoon TV Fanal for season 3 to mid-Season 5.

Jacob Hopkins later was replaced in the mid of season five because his voice reached puberty by another famous child actor  Nicolas Cantu.

Jacob Hopkins who played in Alexander Drew on HBO's hit vampire series True Blood is the younger son in the Hopkins family. He is a school going teenager with the height of 5 foot and 9 inches. He grew up in San Francisco California and has an elder brother named Gerad Hopkins who is a rumored to be an upcoming singer. The information about his parents is still not revealed by the actor.

The handsome young actor Jacob Hopkins is a Tikewando champion and practices martial arts on a regular basis. He is vocal about his affair with his former Co-actress friend turned girlfriend Merit Leighton. The couple is dating each other and they posted their 2017's new year celebration picture together on Instagram as well.

Other than that the actor is involved with humanitarian and social function. Jacob Hopkins was recently seen in a pediatric cancer fundraiser organized by  Hollywood Dance Marathon's Red Carpet. The actor used to get a lot of roles for Leonardo De Caprio's child roles and, to be honest, he totally reminds De Caprio's Basketball Diary's face to his fans and the way he is going, it looks like as if he is going to fit in his shoes one day.?

The talented actor, martial artist, and voice actor started working for big and small Hollywood projects when he was only five years old. He was discovered when he went out on an audition with his father. Then, soon, Jacob Hopkins was seen in The Minis in the role of Brian.

Jacob Hopkins is well supported in his acting career by his parents and over the years he has appeared in some famous series like True Blood, How I Met Your Mother, RCVR, Supermoms, Animal Practice, About a Boy, The Amazing World of Gumball, The SpongeBob Movie: Sponge Out of Water he was seen is The Goldbergs in recurring roles.

Moreover, Jacob Hopkins has appeared in some big screen animation and movie projects such as Inside Out and The Loud House. He has also given his voice to some famous games such as Monsters Ate My Birthday Cake. His recent project is The Nerd Posse where is going to be seen in the role of Kingston Night.  The Nerd Posse is a  TV Movie which is in its early pre-production phase and is set to release in 2017. The actor is supposed to earn a good amount of salary from different acting and voice acting project he gets but his actual net worth is still not revealed by the actor.