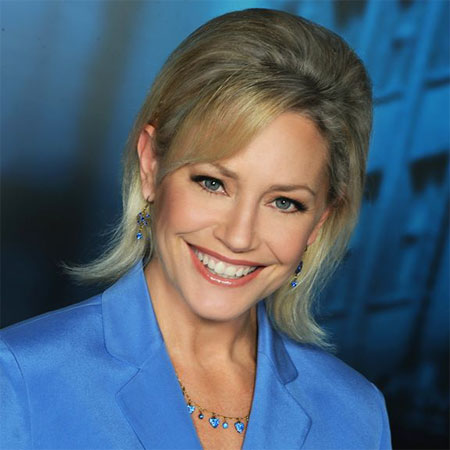 Jackie Bange is the reporter and weekend anchor for WGN-TV, a CW affiliate and cable superstation in Chicago, Illinois
Since October 1995, Bange co-anchors weekend edition of WGN-TV's primetime newscast ' WGN News at Nine' along with Robert Jordan.

Jackie Bange was born in 1962 in the United States of America. She completed her post-baccalaureate degree in Telecommunications from the University of Florida.

Jackie's father used to be a news anchor in Florida and Lancaster, Pennsylvania where her mother was a weather girl.

Jackie Bange started her career as a reporter and noon anchor for the CBS affiliate WPEC-TV in West Palm Beach, Florida. After few years in WPEC-TV, she moved to NBC‘s WMAQ-TV in Chicago in 1990.

Bange joined WGN-TV's News team in August 1993 as a general a s signment reporter. She anchored WGN Morning News from January 1995 till October 1995.

Bange moved to anchor WGN News at Nine in weekend evenings with Robert Jordan in 1995. She is still working for News at Nine.

She has won 'Illinois Associated Press award: Best Hard News Feature' for 'Into the Darkness,' a story of two local pilots and their crew who rescued hundreds of stranded residents in New Orleans after Hurricane Katrina in 2005.

Jackie Bange is married to George Strickland. The couple has three children together.

She is athletic in nature. Jackie enjoys skydiving. She has also completed seven Triathlons till date.

Before marrying George Strickland, Bange was in a romantic relation with her television Executive Producer Dale Chapman.

WGN-TV's reporters' average annual salary is $82,250.  As Jackie is with the network since 1995, she is one of the most well-paid reporters there. Her net worth is likely about millions of USD