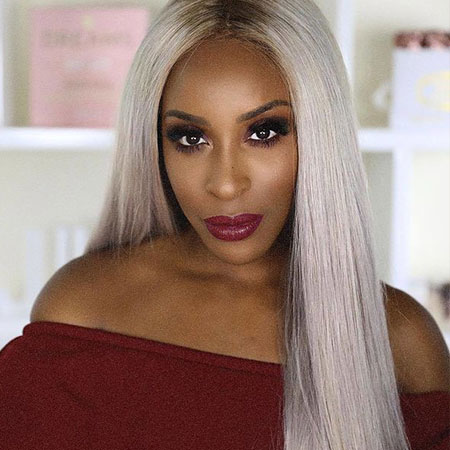 American beauty YouTuber Jackie Aina aka LilPumpkinPie05 is a licensed cosmetologist who posts makeup and beauty related videos on her self-titled YouTube channel. Going against her strict Nigerian-American parents who wanted her to become a doctor or a lawyer, Jackie became the queen of the cosmetic world. She has also partnered with the big cosmetic brands such as Too Faced, Sigma Beauty, e.i.f. Cosmetics, and Sephora. Further, Jackie also advocates for visibility of African-Americans in the cosmetic industry.

Jackie Aina was born on August 4, 1987, in the United States to  African-American mother and a Nigerian father of Yoruba descent. Her birth sign is Leo which defines her personality as leadership, energetic, optimistic.

Aina studied medicine for two years before joining the United States Army Reserve. Then she attended Vidal Sa s soon Academy. But her pa s sion for fashion and makeup led her to a different path. She worked for MAC Cosmetics while she was stationed in Hawaii.

As we mentioned earlier, her folks were never really the fan of her career choice but Jackie she did not listen to anyone and just followed her heart. She once said:

“When I was in the 4th grade I walked around the playground telling people I wanted to be a cosmetologist; I didn’t even know what that was, I just knew that’s what I wanted to be when I grew up!”

Similarly, accepting her friends' suggestion, Aina started her self-titled YouTube channel, Jackie Aina in 2006 where she uploads makeup tutorial videos. She first uploaded a video named Electric Purple Smokey Eye which was well received by audiences. As of 2018, she has more than 2.75 million subscribers on her channel with 218 million views as of November 2018.

She argues that people of color are often ignored and poorly represented in the beauty industry. Jackie said:

“My main frustration with going to a makeup counter or getting my makeup done was I would walk into a store, and people would run around frantically as if they’d never done makeup for a dark-skinned girl. I got tired of being told what I was limited to as a woman of color: black women can’t wear silver eyeshadow, black women can’t wear nude lips, the list goes on. I got tired of being told what I could and couldn’t do, so I started learning ways of doing things myself!”

She tried to bring a change and also motivated other people of the cosmetic world to be a voice to stop the discrimination.

In July 2016, Aina collaborated with "e.l.f. Cosmetics" to create an eyeshadow palette which includes five jewel-tone and metallic shades with both shimmery and matte finishes. After a year, Sigma Beauty launches a set of five brushes designed by Aina.

Aina expressed her opinion with cosmetics brand Too Faced for not featuring enough shades, later Too Faced collaborated with her to expand the shade range of its Born This Way Foundation. By June 2018, the shades expanded from 24 to 35 shades out of which 9 of 11 new shades were formulated by her.

In December 2017, Aina announced she will release two rose gold powder highlighters, La Bronze and La Peach, with France-based beauty store, Sephora. In an interview with Bustle, she said she would create her own cosmetics line by 2019.

Aina was awarded NAACP Image Award for "YouTuber of the Year" in January 2018.

Jackie Aina is one of the successful YouTubers and cosmetologist. As of 2018, she has 2.7 million+ subscribers on her eponymous YouTube channel from where she generates a decent sum of amount. As per the sources, she earns $1.2K - $19.4K per month and $14.5K - $232.4K yearly from her channel. She also makes a handsome sum from her a s sociation with beauty line and companies.

Jackie Aina is in a romantic relationship with her longtime boyfriend, British-born entrepreneur Denis Asamoah aka. Mr. Work Smarter. As per some online sources, the couple has been dating since 2014.

I never knew there was a, love like dis beforreeeee

Previously, she was married to an unknown man whose personal detail is still under review. Reportedly, she had a miserable married life which eventually ended on a divorce.  Her former husband is still a mystery to the world.

Once Aina expressed how people of color are poorly represented and ignored in the beauty industry and often criticized for makeup shade ranges for not being inclusive. According to her, all people are different and has different shades and varieties. Her criticism received positive feedbacks from cosmetic companies and offered her partnerships with them.

Aina uploads a demonstration video on YouTube where she did an ordinary makeup tutorial in black-and-white and subsequently told she put on the makeup of the wrong color.