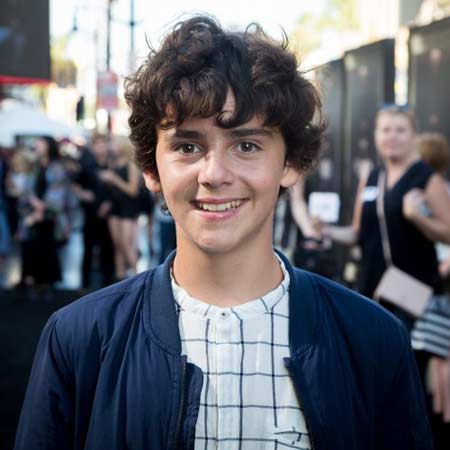 Coming from the film background family, American actor, Jack Dylan Grazer chose the same profession from the early age of 11. Grazer is widely popular for his role, Eddie Kaspbark in the movie, It. He is also known for portraying the role of young Alex Riley in the CBS’s TV series, Me, Myself and I. The actor who is, never afraid of hard work has earned a huge fan following in the very short interval of time.

Jack Dylan Grazer was born on 3rd September 2003 in Los Angeles, California under the birth sign Virgo. Grazer is American as per nationality, and as far as his ethnicity is concerned, he is White-American. He is the son of Angela Lafever and Gavin Grazer (an actor, filmmaker, and a singer). His uncle, Brian Grazer is a producer.

Grazer performed in several productions at The Adderly School For The Performing Arts after being invited into ARTE (Adderley Repertory Theatre Ensemble) program. He won the best documentary film title for his project; Family is Family at his school film festival.

Jack Dylan Grazer made his Hollywood debut in 2014 in the mockumentary TV series, The Greatest Event in Television History created by Adam Scott and Naomi Sablan. The following year, he appeared in an episode of Comedy Bang! Bang!.

In 2017, Grazer appeared as Young Alex Riley in CBS comedy TV series, Me, Myself & I. His character was a high school student who uses his free time inventing. The series starred, Bobby Moynihan, John Larroquette, Brian Unger and Jaleel White.

As of 2018, Grazer worked in an episode of ABC’s sitcom, Speechless with Minnie Driver, Micah Fowler, John Ross Bowie and Mason Cook.

Grazer made his movie debut in 2015 from horror comedy film, Tales of Halloween. His breakthrough came in 2017 as Eddie Kaspbrak (‘’epitome of the hypochondriac’’) in the supernatural horror film, It: Chapter One.

CAPTION: Jack Dylan Grazer in one of the scenes of It. SOURCE: Romper

Jack Dylan Grazer has an estimated net worth of $500 thousand, but, the amount is still under review. As per some online sources, he earns the salary of $10k per episode.

His 2017’s TV series, It: Chapter One grossed $700.4 at the box office which was made with the budget of $35 million. IMDB rated the movie 7.5 stars out of 10. The movie starred Bill Skarsgard, Finn Wolfhard, Sophia Lillis and Jaeden Leiberher.

Grazer also earns from his online clothing line, ''shopjackgrazer''.  Similarly, according to some sources, a celebrity with over 100k followers earns $500 per post. Grazer has over 2.4 million followers, so, he earns more than $500 per post on his Instagram account.

Jack Dylan Grazer is dating a non-celebrity girl, Ellie Hiyar. The couple started dating since 2017. Hiyar was not aware of Grazer’s profession before they started the relationship. The pair was rumored to be separated, however, they have not confirmed the break up yet.

Moreover, Grazer was linked to Natalia who accused him of dishonesty and verbal exploitation. But Grazer denied the cheating scandal and stated,

''How could I have cheated on someone that I never met and I never dated. First, I'd be both you know we like each other and we were friends but we never dated and second after me and Natalia just went separate ways and stop talking. There was at least a year until I and Elle started dating. So for those people that are saying that me and Elle got together the day after me and Natalia stopped talking. That's untrue.''

Grazer is close to Finn Wolfhard, who is famously known as Mike Wheeler in the Netflix’s series, Stranger Things.

Some of his hobbies are creative writing, script writing, shooting films with his friends, boogie boarding and surfing among others.

Here is the video which shows the ten facts about Jack Dylan Grazer: