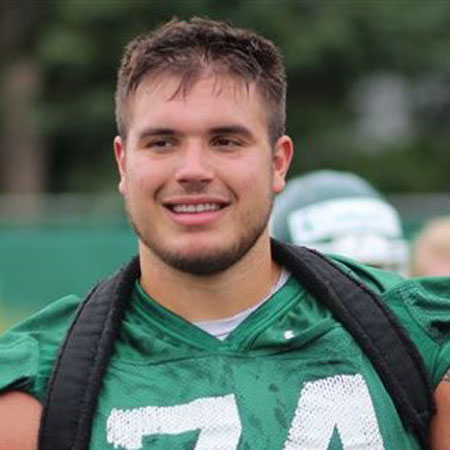 Jack Conklin is an American football offensive tackle for the Tennessee Titans of the National Football League. Besides, he also played college football at Michigan State University.

Tennessee Titans All-Pro offensive tackle Jack Conklin was born on August 17, 1994, in the Plainwell, United States of America. He is the son of Jennifer Conklin and Darren Conklin. He belongs to American nationality and ethnicity wise, Jack is a White American.

Jack Conklin moved to the Michigan State University and began playing as a walk-on player. As a freshman, he started 13 or 14 games at either right or left offensive tackle in 2013. As a soph 0re, he started all 13 games at left tackle.

Jack signed a deal with the Tennessee Titans for a four-years for $15.89 million rookie contract with $15.44 million guaranteed on May 26, 2016. He received signing bonus of $9.76 million from Tennessee Titans.

The 22 years old Jack Conklin is a married man. He is married to his longtime girlfriend MSU soccer player Caitlyn Riley. The couple had their wedding ceremony held in a private way. They dated for a several years before exchanging their vows with each other.

Jack and Caitlyn were also college sweethearts at Michigan State. The pair welcomed their first baby girl Riley Caroline Conklin on March 27, 2017. Jack and his wife Caitlyn are currently residing along with their five-month child in their new home in Oak Hill.

Jack Conklin is rising football player, but he has achieved a commendable amount of success at a young age. He receives a $3,613,104 salary annually as a football offensive tackle for the Tennessee Titans.

Moreover, Jack also signed a deal with the Tennessee Titans for four years worth $15.89 million rookie contract with $15.44 million guaranteed. He received signing bonus of $9.76 million from Tennessee Titans. Recently he also bought a home in Oak Hill for nearly $1.5 million.

Therefore, we can speculate that Jack has also earned a tremendous amount of net worth that is estimated to be more than $5 million. He is 6 feet 6 inch tall in height.