NRJ Music Award-winner Elena Alexandra Apostoleanu, famously known as Inna, is a renowned pop singer and songwriter who came to wide attention after releasing her debut single titled 'Hot,' which was a ma s sive success internationally. Her top-notch singles, including Love, Sun is Up, and Deju Vu, helped her garner additional fame.

Pa s sionate musician Inna was born Elena Alexandra Apostoleanu on 16th October 1986 in Mangalia but raised in Neptun, Romania. As of 2021, she is 34 years old.

She is the daughter of Giorgic Apostoleanu and Maria Apostoleanu. Her father is a sea rescuer, whereas her mother, a singer as well as a dancer.

During her childhood, the singer took part in a swimming competition and was avid in sports like football and basketball.

She became a music fanatic as a kid and was highly influenced by the artist such as Christina Aguilera, Celine Dion, and Whitney Houston, at her teen.

Moving on, she went to elementary school in Neptun and later attended Colegiul Economic (Economy College). She majored in political science at Ovidius University.

She stands at the height of 5 feet 4 inches (163 cm), and her nationality is Romanian.

The 34-year-old pop music artist has an enormous net worth of $20 million as of 2021. The major part of her income comes from her successful music career.

She adds hundreds of thousands of riches from her album sales, endorsements, sponsorship, various social media handles, and streaming platforms. She also runs her own website called 'innaofficial.' 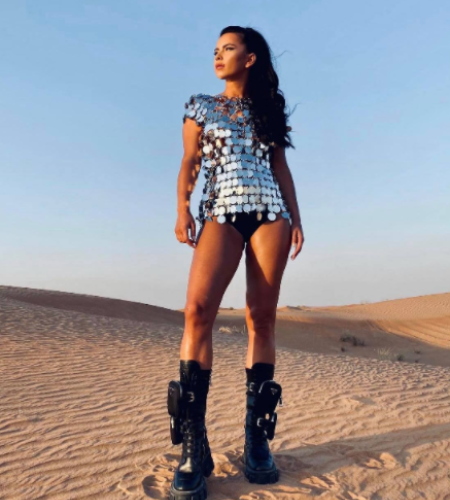 Inna, a renowned pop singer-songwriter who holds a net worth of $20 million SOURCE: Twitter @INNA Brasil

She began her music career professionally after her manager discovered her voice and later reached to sign the production team Play & Win, with whom she recorded numerous songs.

The Mangalia-born songster rose to the limelight, releasing her debut single titled 'Hot,' in 2008, which was a success internationally and peaked Billboard's Hot Dance Airplay chart.

She released her studio album of the same name in August 2009 and earned certified Gold and Platinum. The album features various tracks, including 'Amazing.'

Her second album, titled 'I Am the Club Rocker', was released in 2011, and it features singles like 'Sun Is Up,' which earned her Eurodanceweb Award. She released her follow-up album titled Party Never Ends in 2013.

In 2014, she contracted with Atlantic Records and published the song 'Cola Song' with J Balvin, which promoted FIFA World Cup that same year.

Some of her other released albums are Yo, Heartbreaker, Nirvana, Summer Hits, among others. Her songs like Love, Bad Boys, and Deja Vu were a commercial success.

Did You Know? The singer was once hospitalized after fainting while performing on a stage during her tour in Turkey; however, the incident did not affect the tour.

Boyfriend And Past Affairs

'Hot' singer Inna has been dating her fellow Romanian rapper Deliric since 2020. She previously dated her manager Lucian Stefan for ten years and broke up in 2013.

After that, she was in a relationship with American photographer John Perez. Their relationship ended after a short period of time.