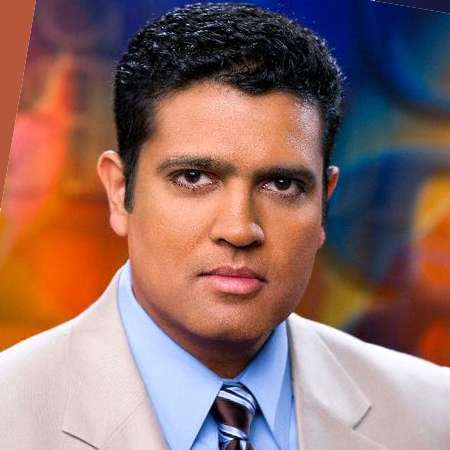 Hari Shreenivasan is an American broadcast journalist. He is an Indian-born journalist currently working as an anchor, senior correspondent, and director of digital partnerships of PBS NewsHour Weekend. He was born in 1974 and is of Tamil ethnicity.

Hari was born in Mumbai, India. He was born to a Tamil Brahmin family. He immigrated to the United States with his family at the age of seven. He attended Nathan Hale High School in Seattle, Washington and became a radio disc jockey during the time. In 1995, he earned his degree in ma s s communication, with minors in politics and philosophy, from University of Puget Sound. During his time in college, he interned for several TV news stations in Washington State. Shreenivasan officially became an American citizen in 2008. He is currently married to Sucheta Sachdev, a music supervisor and has a son.

Shreenivasan started his career as a reporter for WNCN in 1995 in Raleigh, North Carolina. In 1996, he moved to San Francisco, California, leaving WNCN for CNET, where he worked as an anchor and a correspondent, mostly covering the high-tech sector. In 2004, he got a job at ABC News as an anchor and correspondent and concurrently co-hosted the behind-the-scenes podcast ‘ABC News Shuffle’, with Jake Tapper. After working with ABC for 3 years and 2 months, he joined CBS News in March 2007, working as a correspondent. On December 2009, he left CBS news and joined PBS NewsHour. He is currently working as an anchor and sr. correspondent. Along with this, he Is also serving as the Director of Digital Partnerships helping guide the digital strategy of Newshour’s online endeavors.

Since Shreenivasan joined PBS, he has also participated in several projects. Some of them are ‘Coping with Climate Change’, a project that demonstrated the effect of increasing global temperature and shifting weather patterns on American communities, ‘The Doubleheader’, a web-only unscripted video series doc u menting the sport of politics and politics of sports, and ‘PBS NewsHour Student Reporting Labs’, which connected students with a network of public broadcasting mentors, an innovative journalism curriculum and an online collaborative space to develop digital media, critical thinking and communication skills while producing original news reports. He also He hosted at the talk with P.M. of India in Manhattan once.

Shreenivasan has received Emmy nominations for NewsHour coverage of the Gulf oil spill and for his reporting at CBS. He is also the recipient of multiple Outstanding Broadcast Story Awards from the South Asian Journalists Association, an organization for which he served as a board member from 2001-04. During his career years, he has run his own Production Company and freelanced as a reporter for KTVU-TV in Oakland, California. Shreenivasan is also a member of the Asian American Journalists Association and a 2003 graduate of their Executive Leadership Program. He has been earning a lucrative amount of salary and his net worth is also in millions.