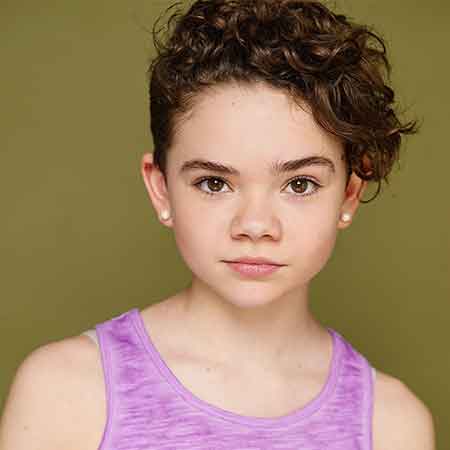 American actress, Hannah Alligood is best known for playing the younger version of Cara Delevingne's character Margot in the 2015 American romantic mystery comedy-drama film, Paper Towns. Her performance gave her a nomination for a Young Artist award. She also appeared in Allegiant, the sequel to Divergent, in 2016. Alligood, however, grabbed huge attention after appearing as Frankie in the FX television series Better Things.

Hannah Alligood was born on June 28, 2003, in Birmingham, England, under the birth sign Cancer which defines her personality to be sentimental and Deeply intuitive.

She was raised in her hometown, Birmingham along with her younger sister, Avery Alligood. She dreamt of becoming an actress since childhood and from an early age, she performed on stage in church, private instruction, local theatre, as well as a school.

Alligood officially began working as a child actress in 2013, appearing in short movie, The Mighty Magic Cape II. She then landed in a role of Annabel in an episode of 2015 American online streaming series, Powers.

In 2016, Alligood featured in two drama films, The Divergent Series: Allegiant as Crush Girl, and Miracles from Heaven as Haley. The following year, she acted in a short TV movie, Out for Delivery as Kat.

As of 2018, Alligood has been working in the main role of Frankie Fox in American comedy-drama television series, Better Things since 2016. She was cast along with Olivia Edward, Celia Imrie, Mikey Madison, and others.

Hannah is expected to earn a decent amount, but the net worth is not revealed yet. As per some online sources, the average salary of American child actors is between $1,000 and $1,200 per day.

Alligood's well-known movies such as Allegiant, Paper Towns, and Miracles from Heaven made $179.2 million, $86.5 million, and $73.9 million in the box office, respectively.

As of 2018, Alligood is at the age of 15 and is too young to be involved in any kind of relationship, so there is no information on her dating rumors and affairs. She currently lives with her parents.

Besides being a great actress, Alligood also has an impressive voice imitation talent. She speaks with different voices when she plays with her friends and tells funny stories during family parties, making people laugh.

Below, we present the interview of Hannah at the Red Carpet Premiere of season 2 of F/X's "Better Things" where she has appeared with the cast including Pamela Adlon, Mikey Madison, and Olivia Edward.