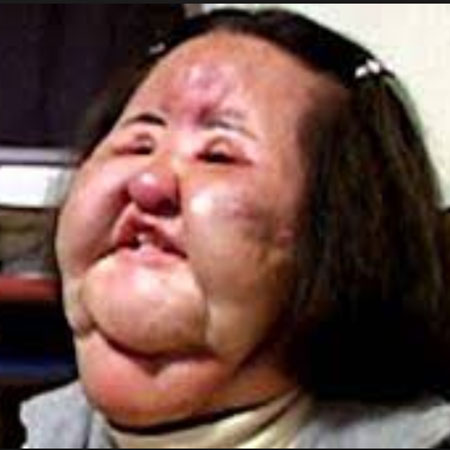 In this era when it comes to looking near perfection, people tend to go a few miles extra without any hesitation. For the sole purpose of good looks, people are addicted to plastic surgery, however, not always things turn out to give expected results just like in the case of Hang Mioku. Mioku is a former Korean model who created a buzz all over the internet when her face surgery went terribly wrong.

She gained extreme hype and become a major subject in the media with all major channels covering her topic. Well, here we are going to talk about her career and her life before and after the terrible surgery.

Hang Mioku was born in South Korea on 8th July 1963 and is 56 years old as of 2019. She holds Korean nationality and is of Asian ethnicity.

She went to the local school for her high school. Moreover, information regarding her parents, educational qualifications, siblings, and family is not disclosed to the public yet.

Life Of Hang Mioku As A Model

Mioku initially started as a model with a smooth going career before she became addicted to going under knives. She had her first surgery at the age of 28 and later moved to Japan where she went under repeated plastic surgeries which eventually turned her life upside down.

How Did Hang Mioku Come To The Limelight?

Due to the obsession to look prettier and better from other girls led Hang to her downfall. Hang became desperate to have smoother and softer skin and went under knives for numerous times and continued to have injections that enlarged her face.

CAPTION: Hang Mioku before and after surgery SOURCE: Pinterest

Mioku's surgeries made her parents difficult to recognize her. When Mioku was taken for treatments she was also diagnosed with a mental disorder.

However, Mioku managed to get her hands on a bottle of silicone and a self-injecting syringe during her treatment and started using it. When the silicone ran out she resorted to using cooking oil which damaged her face in a permanent way and led her to her worst nightmares.

Due to her large face compared to her small body, she was often called a Standing Fan by the locals.

Her unfortunate situation was featured on Korean television which helped her collect donations for her corrective surgery from the viewers.

During Mioku's first 10 reverse surgery, surgeons managed to remove 60g of silicone, oil, and other foreign substances from her face, likewise, 200g from her neck parts.

Despite the surgeries, Hang's appearance is still very scary looking.

Net Worth And Earnings Of Hang Mioku

Regarding her profession, she is currently working in a shop called The Beautiful Shop. Hang was a successful model at a time, however, her obsession destroyed her career as well as her fortune. Sources estimated her net to be around $100 thousand as of 2019.

Moving on to her personal life, the former model is a happily married woman. She is living a blissful conjugal life with her husband Biden and is blessed with two children Natalie and Hunter.

As of 2019, Mioku is living a secretive life as is not in the limelight anymore. Though she has not talked much about her marriage and relationship lately, it is a s sumed that she leads quite a beautiful life with her husband.

Where Is Hang Mioku Currently? Dead Or Alive

Hang who has gone through several surgeries to remake her original look is still alive and as of 2019, she is 55 years old. Although she is facing lots of difficult sue to her obsession with surgery, she is living her life with her own. Currently, she works in a recycling clothing store to sustain her daily life.

Here is a video of Hang Mioku before and after her obsessions with surgeries.