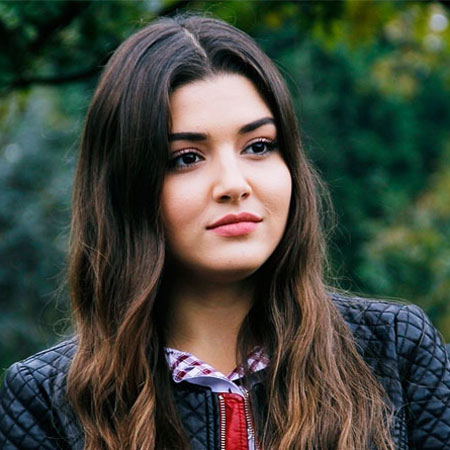 Hande Ercel is a famous Turkish actress, model, and television personality. She is known for her portrayal of Selin Yilmaz in the Turkish television show Gunesin Kizlari. The Miss Civilization of the World title winner, Hande Ercel has been active in showbiz since 2013. In a short period, she was able to make a name for herself in the entertainment industry.

Hande Ercel was born on 24th November 1993 in Bandirma, Turkey. She belongs to the Asian ethnicity/race and holds Turkish nationality. She was born as the first daughter of her parents.

Hande grew up in her hometown, Bandirma with her mother and siblings. She completed her education at the Mimar Sinan Fine Arts University, Istanbul. In an interview, Ercel said that her father wanted her to become a doctor, however, she opted for a career in modeling and acting.

Hande Ercel started modeling for several agencies in 2012. She participated in the Miss Turkey beauty pageant in 2012. She became the winner of Miss Civilization of the World title in the year 2012.

Ercel made her a popular name in showbiz & soon she was offered the role of Zahide in the show 'Calikusu.' This boosted her presence in the showbiz and appeared as Meryem in a short-lived Turkish TV series, Cilgin Dershane Universitede.

Ercel also played a minor role as Selen in another television series, Hayat Agaci, which means ‘Life of Trees.' Her major and most popular role in the romantic-comedy-drama, ‘Ask Laftan Anlamaz’ as Hayat Uzun.

Ercel became the brand amba s sador of Defacto with Aras Bulent Iynemli in March 2017. Currently, she is portraying as Siyah inch in Black pearl alongside Tolgahan Sayisman & Berk Hakman.

Hande Ercel is one of the growing stars in the television industry. She is also the brand amba s sador of Defacto with Aras Bulent Iynemli. She earns a decent amount of salary from her career. She has maintained an impressive net worth in her life which according to some reliable sources is believed to be around $1 million, in 2019.

Hande Ercel, 25, is not married yet. Previously, she dated Ekin Mert Daymaz, an actor. The couple started dating in late 2015. They stayed in a relationship for one and a half years and broke up in 2017. As reported, the reason for their split was their busy schedule and career.

Ercel was also dated Burak Serdar Sanal, a Turkish actor in 2015. The pair broke up their relationship, and the reason behind their split is not known to the public. However, she cleared the rumors by saying the news is nonsense and they are not in a relationship.

The Instagram model is not dating anyone at present. She has kept everything secret about her love life, relationship, and boyfriend.

Similarly, Burak Ozcivit is also a Turkish who has built a distinguishable career as an actor and model.

Ercel is active on social networking sites such as Twitter, Instagram, and Facebook. She keeps updating her thoughts & keeps interacting with her fans & followers. As of 2019, Ercel has over 10.4 million followers which apparently makes her one of the most followed Turkish female actors.

Hande Ercel is a young and aspiring model/actress who stands at a tall height of 5 feet 8 inches and her body weight is 55 kg as of 2019. Ercel possesses a perfect hourgla s s body figure which measures in  34-24-34 inches.