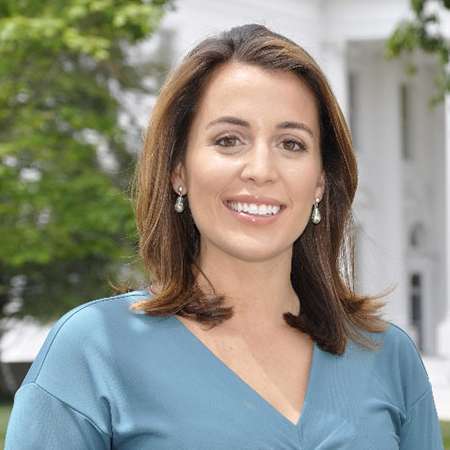 Hallie Jackson, an American journalist, works at NBC News agency. She is a Chief White House Correspondent for NBC News. She is also an anchor for its cable division, MSNBC, and a fill-in anchor for Today.

Hallie Marie Jackson is a television personality correspondent for NBC News. Famous by only Hallie Jackson was born on 29, April 1984 in Yardley, Pennsylvania, to David Jackson and Heidi Jackson.

She spends her childhood here. Before she served for NBC she had worked for various news agencies.

She started her career as a journalist in 2006, working for WBOC-TV in Salisbury, Maryland, and Dover, Delaware, she worked here for almost about 2 years.

She, then, later joined WFSB in 2008 and worked on this news channel for four years. Her hard work and dedication led her to Hearst Corporation, and worked as a reporter, during her time here, she gave a report from 26 different stations including Washington, D.C.

She then joined NBC in the year 2014 and worked as both journalist and reporter. She started covering the Ted Cruz presidential campaign for the network. Information about Hallie's parents and family background is not highlighted on any media platform.

She graduated high school from her native Yardley, Pennsylvania. She then joined Johns Hopkins University and graduated Phi Beta Kappa, with a Bachelor of Arts degree major in Political Science in 2006. Phi Beta Kappa is the oldest honor society in the United States of America, for Liberal Arts and Science.

Halie, an experienced journalist of NBC, earns a huge amount of money. Sources have estimated her net worth of $1 million.

She then tweeted from her Twitter account of shopping online and buying Kleenex Ultra Soft Tissues, which were worth $53.91, and ordered a book called “Surviving Your Season of Shame: Overcoming Life's Most Embarra s sing Moments” by Catrina M. Blount.

Hallie Jackson is not single but in a romantic relationship with Frank Thorp, a producer, and reporter for the Capitol Hill Team of NBC News.

It's unknown when exactly the couple started dating but they reported have been in a relationship for years.

The couple welcomed their first child, a baby girl, on March 9, 2020. They have named their daughter Monroe Jackson Thorp.

We have some happy news to share from two members of our @NBCNews family! @halliejackson and @frankthorp have welcomed a baby girl to their family! pic.twitter.com/kOzqRPIogM

Jackson was previously married to Doug Hitchner. They exchanged wedding vows in 2011 in Perkasie, Pennsylvania, one year after getting engaged. The date of their divorce finalizations has not been disclosed.