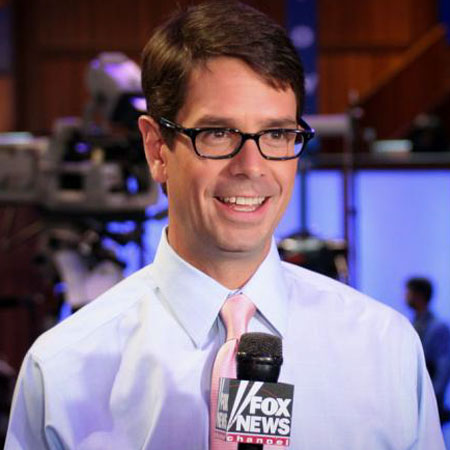 Griff Jenkins is an American television and also a radio personality. He is best known for working with the Fox News Channel as a Washington-based correspondent.

Griff Jenkins was born as William Griffin on 15th December 1970 in California, Loss Angeles, United States of America.  He belongs to North American ethnicity and holds an American nationality.

Jenkins joined the Memphis University School in the year 1989. After his high school education, he enrolled at the University of Mississippi where he graduated with a B.A degree in English in 1993.

In the year 2003, Griff joined the Fox News Channel (FNC) as a radio producer.  After a short period, he started to work as a producer for the Tony Snow Radio program until he accepted the role of White House Press Secretary in 2006.

Other than his appearances on his shows, he frequently makes guest appearances on a late night news program 'Red Eye w/ Greg Gutfeld. Griff Jenkins has also a co-hosted for Fox & Friends weekend occasionally.

On 24th of March 2009, he reported a Tea Party event in which the protesters were planning to 'Tea bag the fools in D.C.' Jenkins covered stories like the 2008 and 2012 presidential elections as well as the earthquake in Haiti as a part of the FNC.

Griff Jenkins reported the news from Moore, Oklahoma regarding the aftermath of the deadly EF5 tornado in 2013. Later he covered the aftermath of the Boston Marathon bombing on-site as well. Jenkins' efforts and passion towards his profession have paid him quite remarkably.

Griff Jenkins is married to Kathleen and has two children; Madeline and Mackenzie from her wife. The couple currently resides in Washington, D.C with their children. There was news in the media saying Griff Jenkins is dead, but it turned out to be an internet hoax.

Griff Jenkins has worked with veteran journalists like Bill O'Reilly, Sean Hannity, and Greta Van Susteren and has appreciated them as nicest and coolest people ever.

Griff Jenkins gets an impressive salary as Fox News is said to pay significantly more than the average wage. That makes his net worth count in $1 million, most likely, if not double-digit millions