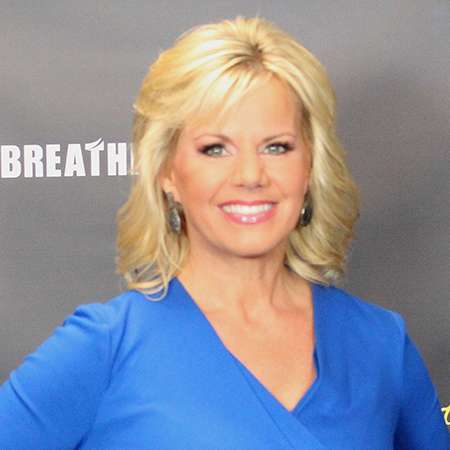 Gretchen Elizabeth Carlson popularly known as Gretchen Carlson is a former 1989 Miss America beauty pageant winner and an American television journalist who is currently working as a host in the Fox News. She currently hosts the Fox News’s daytime show The Real Story with Gretchen Carlson.

She has been married to Casey Close since 1997 and shares two children. The pair tied the knot on October 4, 1997, and resides in Greenwich, Connecticut with their children.

Born in 1966 June 21 at Anoka, Minnesota, USA, she holds the American Nationality and belongs to Swedish ethnicity. Gretchen Carlson is the daughter of Karen and Lee Carlson. She was raised in Lutheran family thus has the Lutheran faith. She has three siblings, two brothers, and a sister.

Gretchen had attended from Anoka Hennepin School District 11’s Anoka High School and graduated from Stanford University in 1990 with a degree in sociology (organizational behavior).

Talking more about Gretchen, she was the 1984 class valedictorian in her school. She is very skilled at playing the violin. She has won numerous local and national competitions in musical competitions. She has spent five summers studying at the prestigious Aspen Music Festival in Aspen, Colorado.

She had been featured in different musical Orchestra as a soloist including Saint Paul Chamber Orchestra. She was one of the Anoka Homecoming attendants in 1984 and won Miss Minnesota in 1988 leading to winning Miss America title in 1989.

Talking about her professional life starting from her career, Gretchen Carlson started her television career from WRIC-TV in Richmond, Virginia as a political reporter. Later she served as a weekend anchor and reporter for KXAS-TV based on Dallas and also as a reporter at WOIO TV which was based on Cleveland Ohio. Afterward, she moved to WCPO-TV based on Cincinnati.

Find out about Gretchen Carlson's lawsuit against Roger Ailes in the video given below:

Gretchen had started her media career in a franchise called Neighborhood News. Gretchen Carlson joined CBS network in 2000 as a news correspondent. Later in 2002, she began to co-anchor of the Saturday Early show in the network.

In 2005, Gretchen Carlson moved to Fox News and is working in the network ever since afterward. She was the regular co-host of the Fox News’s show Fox and Friends until 2013 after she announced her departure from the program. Whilst working in the Fox and Friends show she was pulled into controversy in 2007 in an interview with Dan Bartlett where she labeled Democratic U.S Senator Ted Kennedy as a “hostile enemy” of United States.

Gretchen Carlson's Net Worth And Salary

Gretchen Carlson's net worth is $16 million at present. She earns an annual salary of $1.5 million from her career.

Being a talented and popular personality, her net worth was reported to be around $2.5 million USD  in the past, paying off her good salary. Her fans can follow her on Twitter and like her on facebook to know her latest updates. Her fans can know about her through the wiki and other internet sites where her beautiful and sexy pictures can be found as well.

Gretchen Carlson besides being active in media, she is continually working with the Miss America pageant. She serves as the national celebrity spokesman for March of Dimes. She was honored with the inaugural class of Anoka High School Hall of Fame in 2011.

Beautiful and talented Gretchen Carlson has the perfect body shape that makes her look gorgeous and stunning in any of the outfits she wears even today as she has maintained her looks and body taking care of her diet and physical exercise. Gretchen had a love affair with her former boyfriend Kevin McGraw before getting married to sports agent Casey Close in the year 1997.

Kevin and Gretchen’s relation ended as she could not give much time to her relation to leading her marriage to Casey Close. She has two children from her husband Casey. She is spending her happy married life and has maintained her professional career as well. There is no any sign of her getting a divorce in near future as she is not involved in any rumor relating to a guy and to it Casey is a very understanding husband who seems very supportive in her career.